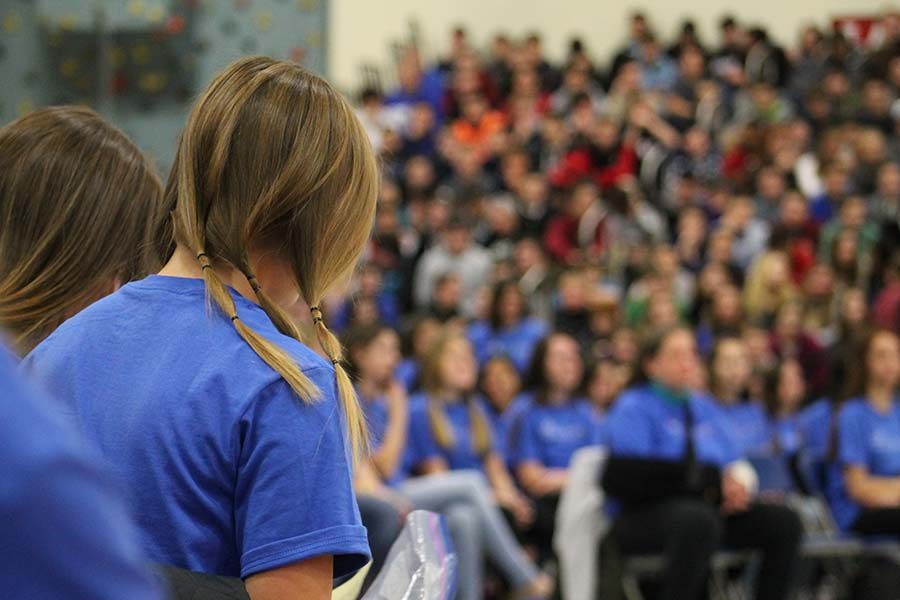 Leading up to the Day of Giving this Friday, some Pantene Angels spoke about the experience of donating their hair and gave explanations for their selflessness, telling what drove them to donate something so personal such as their hair. Many of the girls have similar thoughts, but every story is different. Each Angel shares a unique perspective and special advice to anyone who wants to donate.

If you are considering donating your hair, it is not too late to sign up. See Mr. Juster in room 204 to ask questions or pick up paperwork. As Mr. Juster says, “If you want to see a miracle, be the miracle.”

All pledges were reached out to for this article, but only received responses are featured. If you have pledged to donate and would like to be mentioned in this article, email [email protected] before the Day of Giving.

I don’t enjoy long hair because I find it’s just a hassle, and if I don’t want it, someone else should have it. My hair isn’t that long and most people think, “What? You can’t! It’s way too short!” But I am more than willing to give my hair to someone that needs it, because I certainly don’t. My hair will grow back. The person who is getting my hair may not ever have their own again.

Anyone that is thinking about donating their hair should. Getting down on the floor and having your loved one or your friend cut your hair is such a worthwhile experience. You feel a sense of unity as everyone cuts their hair simultaneously. Eight inches is less than you think it is, but it can make a huge difference to someone who has zero inches of their own hair.

I have been on the fence for the past three years on whether to donate my hair and I have wanted to cut my hair more and more due to the absolutely emotional and caring atmosphere that Pantene brings to Londonderry, and I decided I wanted to be a part of that my last year here at LHS.

I have been debating on donating my hair every year but never had the courage to sign the papers and make it official. I know my hair will grow back and that somebody else needs it much more than I do.

I signed up to donate my hair on the Day of Giving to make a difference in someone else’s life. I know a little bit of action from each person can go a long way. I’m excited to see how I’ll look after because I know it will be a big change. I think becoming involved in the ceremony will be a completely different feeling than just hearing about it, and I will feel more connected to those affected by cancer.

I signed up to donate my hair because it is for such a great cause. I know by donating just eight inches I can change somebody else’s life. I also signed up because I have had family members who have had cancer and who have passed away because of the disease. I also have had friends whose parents have had cancer. I know I can change the way somebody feels about themselves by giving away something I love so they can have something they love.

I will be donating my hair this year because so many people are affected by cancer. Losing my hair is something I could never imagine on top of everything else someone battling cancer would have to endure. With that being said, although I love my long hair, I also long to make people happy, so if donating my hair makes someone’s life a little better, then, without a doubt, it is all worth it.

I decided to sign up to donate my hair again this year because of the amazing experience that I had last year when I donated. It was breathtaking to be part of something so big and powerful, something that has the ability to make a huge difference on the lives of so many people, and I just couldn’t help but be drawn towards donating again. Also, much to my surprise, I missed having short hair a lot, so I just put two and two together and decided to sign up to donate my hair on this Day of Giving.

[Last time I donated my hair,] not only did I love my new haircut, but it felt astounding to be able to be a part of something so large and motivational. It really opened my eyes to what a difference a single person can make in a single act of selflessness and kindness. I could see very well for the first time how much of a difference people can make when they come together to form something bigger than the individual parts added together. By acting as a school and a community, we were all able to make positive change.

Although my hair will be short for prom, I am over the top excited to be donating again. I love to make people smile, and just knowing that I could be making someone else’s life a little easier makes it all worth it.

There is an indescribable feeling when the scissors are slicing through your hair, and you realize that you just did something good for someone else (not to mention a sweet new stylish hair-cut!). The feeling in the gym at that time is just amazing, and being a part of something that big is really exciting.

Anyone who is on edge about donating, please talk to someone who has previously donated! They can answer any questions you may have about the process and the day itself. Also, don’t ever feel pressured to just because you have long hair! You should really be committed if you decide to take the wonderfully brave step to donate. If you are interested, contact Mr. Juster for all details and materials!

The Day of Giving is such an emotional and moving event, and to know that such a small thing that I can do can mean the world to someone else, it is truly worth it. Members of my family have been affected by cancer and that only motivates me more to want to donate my hair.

I am so excited to donate my hair. I know that for seniors there are lots of big events that happen in the spring like prom and graduation and some people hold back from donating their hair for those reasons, but I have been waiting to do it for two years and can’t wait to have short hair again because to me the bottom line is that my hair will grow back no matter what, but cancer patients don’t have that luxury and Pantene Beautiful Lengths can change that.

I’m really happy that I can give something to people who have lost their hair. For many people, it is true that your hair is an important part of you

from a young age. No matter how many bad things you say about your hair, or how many times you wish you had somebody else’s, you still could never imagine yourself without it. That’s why I have donated my hair throughout the years. I want people who have lost their hair to be able to know how it feels to not have to worry about losing it.

Although my first time donating was nerve wracking, I’ve learned that donating is about the person you’re helping. It’s about their reaction when they put on the wig for the first time. It’s about the surge of confidence they feel walking down the street. It makes me happy to know that I can influence somebody’s life in a positive way.

I signed up [to donate my hair] because I like having long hair, but after some time it gets too long. Instead of just getting a haircut at the hairdresser, I can live with my long hair and then donate it to someone who will love it.

[Donating] was definitely a nerve racking experience, but every moment was worth it, to know that someone out there battling this awful disease will get a wig made of real hair.

When I was in seventh grade, I came to the Day of Giving to help cut my sister’s hair. It was honestly one of the most heartwarming days I have ever experienced. Everyone was all so supportive of the cause and each other. That’s what made me want to donate the first time, and I felt so great after doing it that I wanted to donate again, so I decided to pledge my hair this year.

I’ve never heard anyone ever say that they regret donating their hair; I’ve only heard that they would do it again.

I signed up to donate this year, for two reasons. I’ve cut many of my friends’ hair in the past, and even that small contribution is a beautiful experience, let alone giving up your very own hair, and I really want to experience this. Second, my cousin Danny who was in the armed service, had cancer about 6 years ago, and was deployed from the army because of it. He spent a long time in treatment and recovering, and it was a very saddening experience. He is and was such a strong man, and I’m doing this for him and so many others like him.

I’m sad that I have to see my long hair go, but I know that I am doing it for the right reason; I know that giving my hair to someone is the right thing to do because I love being able to help other people that need things more than I do. I take the things for granted that I am grateful for, like my hair, but I want someone else to have it because I really don’t need it.