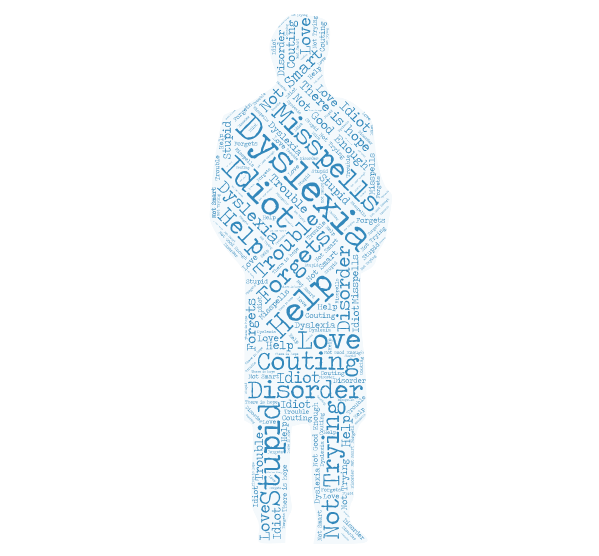 The day I found out that I had dyslexia, I didn’t know what that really meant. I was told it was a learning disability, but I didn’t know what that was either. Before that day, I struggled to spell, do simple math, and read quickly, so my mother took me to Oxford learning where I got tested to figure out why I was struggling. I didn’t really understand what I was doing, I was just told that I was going to be tested to figure out if I had a condition, so my first thought was that I was going to the doctors.I started to get nervous. We arrived at the place and they took me into this room. My mother was told to sit outside. I again got nervous. I was scared because I didn’t know what was happening. There were spelling tests, math tests, visual tests, a block test, and an oral test. I finished up they told me and my mom that they would have the results in a couple of days. Two days later they called my mom and told her to come back. They then took her into the room to explain what was wrong with me. It ended up being dyslexia.

I told no one because I didn’t want to be called names. I was scared to say it. Now, I’m not. I have come to terms with it. A year ago I just started researching it and I found so much information. I realized that there are different forms and things that people have troubles with. I also had those relatable moments where I thought, “That explains a lot,” and “I feel that way too.”

When I was little I would confuse letters and numbers. I also have horrible penmanship. All my teachers have told me I need to write neater. I try so hard but I just can’t seem to do it. Counting money is a problem too. If I am buying something I just hope it’s not a complicated sum like $4.34 or $18.56. When I am taking money for an event, and when the person gives me a $10 when it was only $6, I take time to count back the change that the person needs. Them standing there makes me feel pressured to give them back the change quickly.

I have a decent long-term memory when it comes to remembering experiences, faces, and locations. I am not great at remembering names. This can be a problem. We all have had those awkward situations where you don’t remember someone’s name and you’re like “hey dude” or completely avoid saying their name. My first week of crew practice I met this junior and he told me his name and told him mine.The next day I had completely forgotten his name. I was embarrassed to ask him for his name again so for that week his name was dude. For me that happens more often than not. I am not good at recalling facts and information that I have only heard once or twice.

During spelling tests I struggled remembering how to spell things; I just couldn’t spell simple words like computer, falcon, ask, or queen. So my mom and I would study a certain number on Monday, certain number on Tuesday, the last ones on Wednesday, then study them all together on Thursday, for Friday’s test. For a long time that system worked but, sometimes I would have a slight slip up.

Another test I had to take in my younger years were the comprehension tests. In class we would read a short story throughout the week, then you would take a test about the short story. It was based on if you could remember what the main character did, what was the setting, what problem did the character solve, what is the lesson, and did you understand it. I wasn’t good at those either. My mom and I would again spend time studying all the papers about the story throughout the week.

Under stress I will mispronounce words, phrases, sentences, and syllables. When I’m presenting a project I need to relax so I won’t mispronounce things during my presentation. I can publicly speak well as long as I am not stressed; taking deep breaths always helps. Once last year I had to talk for five minutes in Spanish class and we could not have any paper helping us. I was so nervous I was going to mess up. Once I got up in front of the class to do it I was like freaking out. I began and i just jumbled my words and I tried to talk fluently but, I just couldn’t. I ended up getting a C+ on that because I couldn’t talk fluently.

Dyslexic kids have their troubles, but they usually have a strength. I can write stories, read at a high level, and play sports. Many big celebrities have dyslexia and you wouldn’t know it. Whoopi Goldberg has dyslexia and she became a talk-show host and a comedian. Steven Spielberg is a huge film-maker and has made 36 movies as of 2016. Anderson Cooper is a CNN news anchor and he has dyslexia. Muhammad Ali the famous boxer had dyslexia. The beloved actor Robin Williams was a dyslexic and he made it big in the acting world. All these people made it big and didn’t let dyslexia stop them from living their dreams.

I have overcame a lot of my troubles. The words don’t jump around any more, I have gotten better at reading, comprehension, and the ability to write papers. If I didn’t have these troubles I have no idea how my life would have been different. I had to struggle to get to where I am now. I don’t think I would be doing what I am doing now if it wasn’t for dyslexia. People consider my dyslexia a hindrance, but I’d say that it’s a gift I never even knew I wanted.