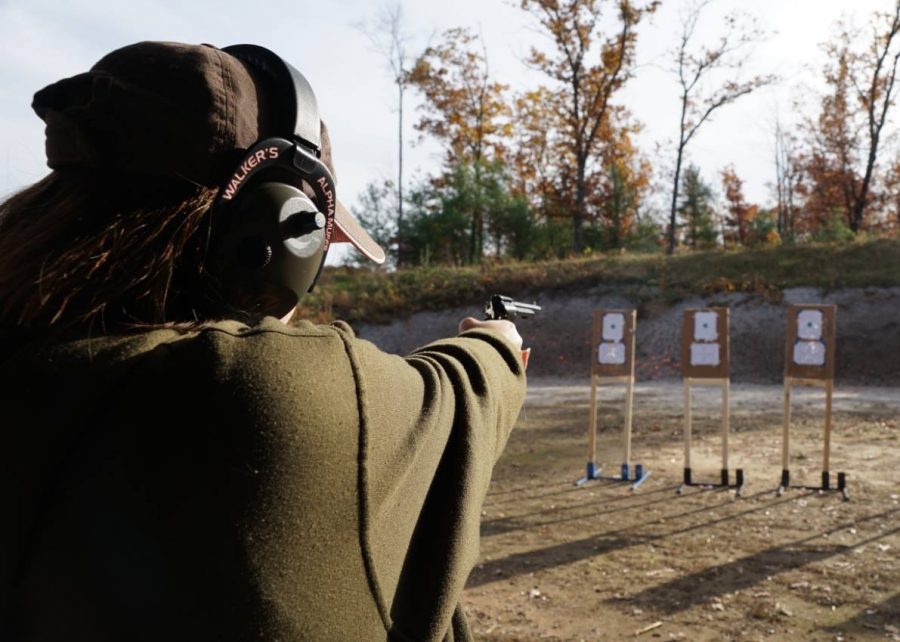 Steady breathing in and out steadies my hand as I aim for the target ahead of me and pull the trigger of a .22 revolver. As an addition to the Women’s Defense League of NH’s Inaugural Basic Pistol Class taught at the Londonderry Fish and Game Club, women were given the chance to shoot a .22 revolver after having learned the basics of shooting on a .22 Sig pistol.

Hi, my name is Nicole Sarno. I’m a sophomore at LHS and… I shoot guns for fun.

Without knowing anything else about me, you have probably already decided what you think of me. Sadly, the majority of you most likely think of me as a violent person or a murderer on the verge of a shooting spree just because of this fact.

I learned how to handle a gun and how to shoot from my ex-marine father who knows a lot about guns and gun safety. I know how to properly take care of a gun and how to use one appropriately. I’ve never even shot an animal but at the mention of a gun I can be considered dangerous.

Would your impression of me be different if I introduced myself as someone that likes cars? It probably would be. When someone says they like cars, they get a much more positive response than someone that says they like guns, even though, statistically speaking, in 2014 more people died in motor vehicle accidents than from guns.

Thousands of people die every year from car crashes, both intentional and accidental, but no matter how safe a person is with a gun, they are more likely to be viewed as a greater threat than a car enthusiast.

I know there’s a lot of controversy about guns, and I understand why people dislike them, but a lot of people talk about guns as if they alone are the cause for all the shootings.

When there is a drunk driving accident on the news most people will think it’s common sense that the driver is at fault, but nobody wants to put prohibition back or a ban on the alcohol involved.

In the case of a mass shooting, however, more people start focusing on banning guns and having stricter gun laws because they think that will make the future better. People driving cars kill people but nobody talks about getting rid of cars or adding new laws but when someone shoots a person with a gun everybody talks about having more restrictions on guns.

No law will ever stop people from killing other people. If someone wants to kill, they will kill. Instead of focusing on the weapons of choice, we should

be more focused on helping those who feel the need to kill. Instead of shoving a band-aid over the issue by saying we should ban guns because they’re dangerous, we should try improving mental health departments and social services to help protect more people and help those who are dangerous.

We should focus more on protecting the laws that are already in place and reporting those who are dangerous, such as Devin Kelly who killed 26 people in the Texas Shooting. He had been mentally ill but the FBI failed to report him and block him from purchasing a gun. We don’t need more laws against guns, we just need to enforce those we already have.

Just because some people with guns are dangerous does not mean everyone with guns is dangerous.

Those of us that respect guns and know how to be responsible with them should not feel judged for what we like to do. Some of us shoot for protection, some for hunting, and others for sport, but a lot of people don’t care because after all, they’re dangerous weapons that will always be viewed as such.