Students stuck on social media: a new kind of addiction 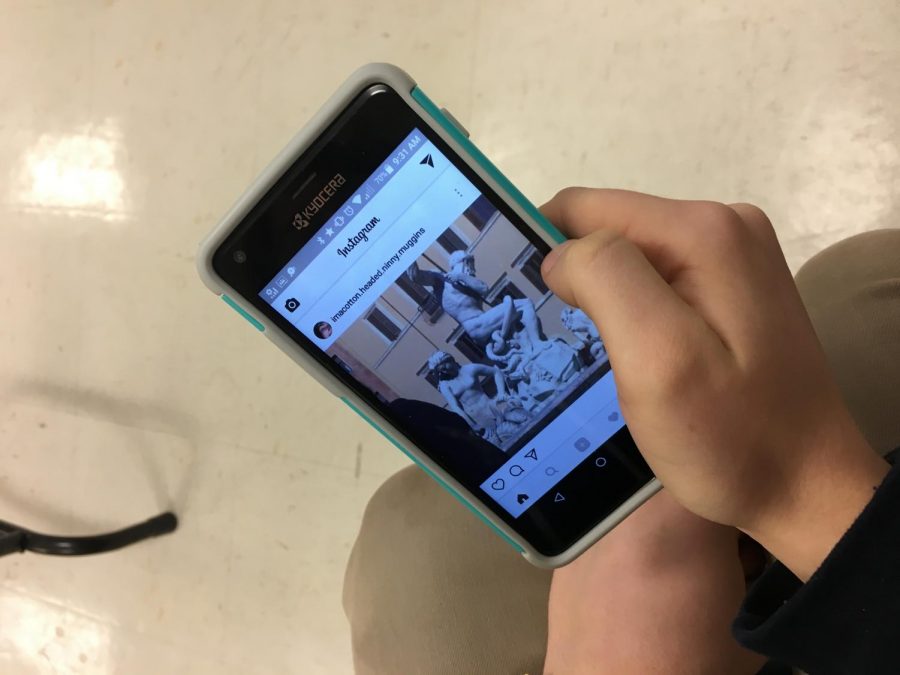 Instagram is a popular social media platform, especially among teenagers in high school, where many people try to display a perfect life.

684 followers, 24 snapchat streaks, and 211 people hit that like button. Voicemail box is full and who knows how many messages there are.

This is the new reality.

It is not a smile or a moment of shared laughter. Life has become the number of shares on a post. The world is officially revolving around social media.

Right now there is probably a young girl staring at her phone crying because she thinks she doesn’t look like the others. A boy who thinks he is lame because he doesn’t have nearly as many followers as the girl he likes. Teens spend their time justifying their worth based around a like button, disregarding the fact that what they see is not reality.

As a teenage girl, it is easy to verify that what is seen on social media is not the real thing. Sure there’s a picture of a girl on the beach in her bikini, but what isn’t shown is the fact she is clinically underweight and goes to doctor appointments weekly for an eating disorder.

A boy who posts a picture with his girlfriend, regardless of the fact they fight every single day. Nobody has a perfect life, and that is the biggest deception about the internet. People do not post the bad things going on in their lives, they post exactly what they want others to see.

That is exactly what’s so dangerous about social media playing such a massive role in the everyday life; the effect it has on people mentally. Life is consumed by numbers on a scale, numbers on a test score, on a dollar sign, intake of calories, price tags, followers, likes, shares… it never ends.

This is the source of which social media feeds off of. These numbers are now publicized and used as competition amongst others. All of these materialistic and social standards are brought together in one convenient space where people can do everything in their power to tell others how awesome they are. It brings a new level of expectations and social neglect that is unstoppable.

Unfortunately, it’s 2017 and technology is something that isn’t going away anytime soon. Dismantling social media is out of the question and would eliminate the benefits received through these networking sites. Adaptation to these circumstances is necessary especially throughout the teenage years.

Knowing the difference between real life experiences and artificial poses for a post will determine the happiness of an individual. These complications will take time for a young adult to comprehend, but once they realize it, life will be simpler.

Life is a combination of immense complexities and simple moments of bliss which together make life worthwhile. Within the blink of an eye, it can be over. Every thought, every memory, every dream can all be gone so quickly and it would be a sin to look back and realize life was spent hiding behind a screen.

Social media is all well and good, but be sure to choose priorities wisely.