Returning to the Rose Bowl: A look into the past and present trips to Pasadena, CA 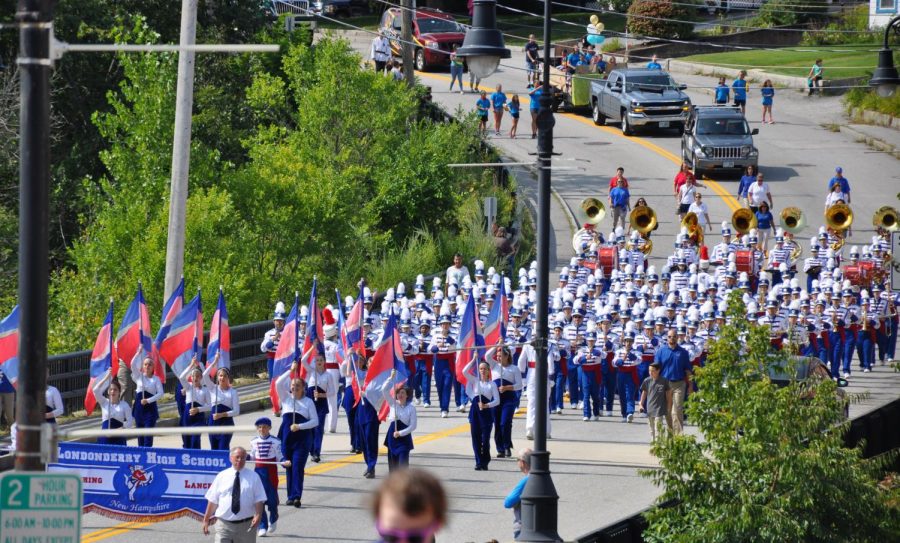 The band marches in the annual Allenstown parade. All of the Old Home Day and holiday parades prepared the Marching Lancers for the Rose Bowl parade.

The Lancer Marching Band and Colorguard will embark on a flight to Pasadena, California to march in the Rose Bowl Parade for the 5th time on December 28, 2017. Past alumni, teachers and students are excited for this occasion and are looking forward to seeing Lancer Nation represented in the Tournament of Roses.

Dr. Lindley-Soucy, Mr. Soucy’s wife and the Humanities Curriculum Coordinator, is going to the Rose Bowl for her third consecutive time and cannot wait to share this experience with her daughter who is in the color guard. Before she married Mr. Soucy and when Mr. Smith was the band director, she volunteered her time and chaperoned short overnight trips for the band.

“Watching the kids on Colorado Boulevard, with the mountains in the background was my favorite part,” Lindley-Soucy said. “It’s such a beautiful place to view them and seeing the Lancer Band and other bands from all over the world displaying their exceptional marching and music skills.”

Some freshmen are looking more towards going on their first trip with the band and spending it with some of their closest friends.

Freshman Sarah Gerardi is looking forward to “having the bragging rights in the future” from travelling with the band on their 5th trip to the Rose Bowl.

“They’re so focused,” Parent said, “but it’s obvious every member enjoys it.”

Math teacher Ms. Willis played the piccolo with the Marching Lancers and also performed in the Rose Bowl when the band went six years ago in 2011.

Ms. Willis remembers getting In-n-Out Bugers after finishing the parade, which were tricky to eat since they had their band uniforms on.

“We were all hurrying to take our jackets off, trying to avoid the mustard and ketchup,” Willis said. “That night, my roommates and I watched the reruns of the band performing two or three times.”

Ms. Willis’s dad, history teacher Mr. Willis, also went to the 2011 Tournament of Roses and remembers how much he loved watching the parade and getting to see his daughter marching. Mr. Willis experienced the Rose Bowl not as a chaperone, but as a parent going to support his daughter. He really enjoyed the trip and appreciates the hard work the Friends of Music (FOM) puts into planning the trip for him and his wife.

“The parade itself I grew up watching, but it was nothing compared to seeing it live,” Mr. Willis said. “The explosion of it all–that’s the best word I can use to describe it–explosion; an explosion of color and crispness of the floats and the marching bands passing us by.”