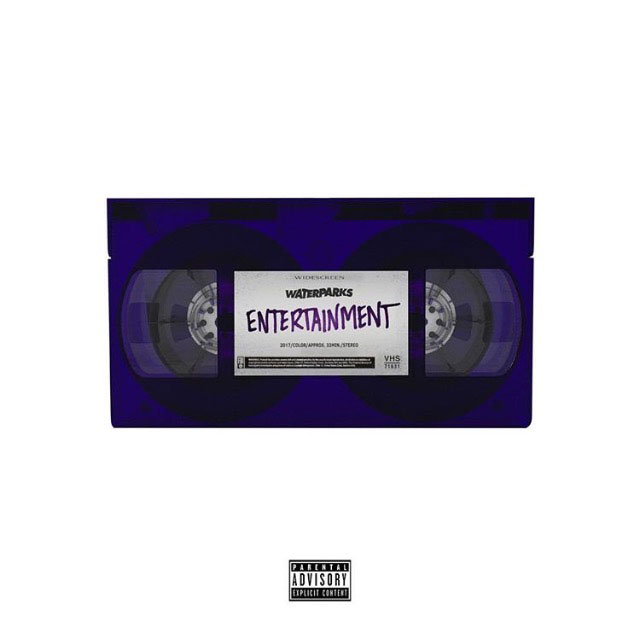 Pop-punk band Waterparks released their second full-length album, Entertainment, and to be honest, I’m not quite as entertained by this album as I’d hoped.

In October 2017, Waterparks dropped lead single “Blonde” alongside the album announcement. Just as vocalist Awsten Knight said, “Blonde” is definitely the song that most sounds like first album Double Dare, but there’s nothing wrong with that.

In fact, “Blonde” is one of my favorite tracks from Entertainment. The fervent guitars pair with a super catchy chorus that just doesn’t get out of your head.

While “Blonde” reminds me most of their debut, Waterparks have certainly been experimenting with some electronic sounds, some 80s vibes, and even some new wave/synthpop ideals. For example, they really go out on a limb with “Crybaby.”

“Crybaby” is a dark, 80s, synth-pop track. “Crybaby” works mostly with synthesizers and a programmed drum track. Though repetitive, the unsettling, creepy feel is what truly brought the track to life for me, and as someone who’s a big fan of creepy/unsettling music, I really appreciate this track.

This ‘vibe’ is also felt within “Not Warriors,” one of my other favorites from this record. The chorus is grand, heavy on the guitars and vocals. The synthesizers in the background almost feel like a callback to “Hawaii (Stay Awake)” from their debut, and the bridge is intense, but in a good way.

“We Need to Talk” makes me cringe. Beginning with a reference to Justin Bieber’s hit “Love Yourself” was a horrible idea, and as much as the theme of “deceptiveness” is very prominent in Knight’s life (as his ex-girlfriend cheated on him while he was on tour), the song is too repetitive.

On a more positive note, “Rare” and “TANTRUM” will give listeners a jolt after sitting through “Lucky People.” From the opening guitar riff, I knew I liked “Rare.” It’s a classic pop-punk, pop-rock Waterparks song, and you can definitely catch me with my headphones on rocking out to “Rare.”

“TANTRUM” finally brings some fire to this record. Not only is this song a callout, but it’s also extremely petty, which, yes, from opposing views may seem ridiculous, but Knight certainly gets his points across.

“To a certain married mister that tried to mess with my misses, try to come around again. You’ll catch some swings and no misses… And if I see you in person, I’m taking teeth. Trust you’ve earned this,” is screamed by Knight. He seriously hammers you with this cloud of anger; it’s insane, and I love it.

I’m no metalhead, but I appreciate this side of Waterparks, and I’d love to keep hearing it in their music.  “TANTRUM” is definitely a angrier version of “Little Violence,” which is my favorite track from their debut, so it’s no surprise I’m a big fan of “TANTRUM.”

“Peach (Lobotomy)” experiments with whistling and acoustic guitars. Personally, I’m not a big fan, but it’s definitely grown on me since the first time I listened to it. The “bum-bum-bum” doesn’t settle well with me for this song, and it’s kind of always a hit-or-miss thing for me, but I don’t really think it has a place in “Peach (Lobotomy).”

Entertainment closes with “Sleep Alone,” which I like on it’s own, but, as as last song of Entertainment, confuses me. This record feels pretty inconsistent, especially from track six until the end (or track ten). I mean, you go from boring “Lucky People,” to the roaring “TANTRUM,” to curveball “Crybaby,” to an average, pop-punk song? I don’t know, it just doesn’t satisfy me. If anything, it just leaves me more confused.

As a whole, Entertainment is incomparable to Double Dare, and even the Cluster EP. There are some good moments, but they get weighed down by the bad ones. I’d give Entertainment a 3.5 / 5, but that will not stop me from going to see them live the next time they’re in Boston.