The music of late March: Panic! At the Disco, Shawn Mendes, and Snow Patrol 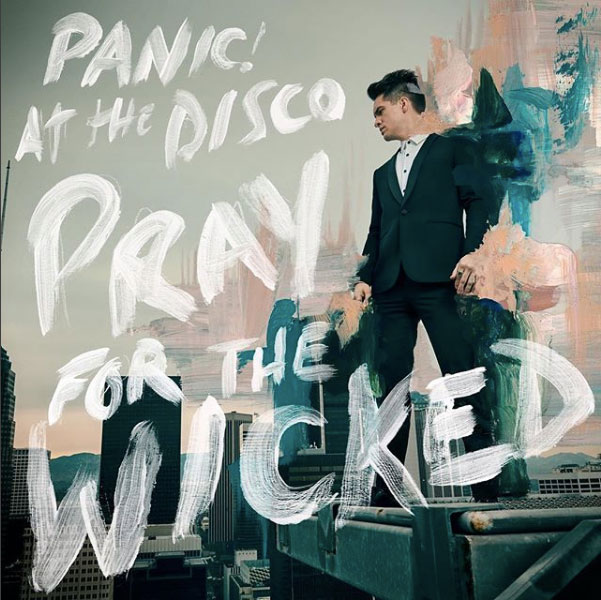 Album artwork for Panic! At the Disco’s upcoming sixth studio album, Pray for the Wicked. The album will be released on June 22, 2018.

Late March brought long-awaited music for fans of Panic! At the Disco, Shawn Mendes, and Snow Patrol, but were they worth the wait?

Say Amen For Silver Linings, Panic! At the Disco

Pop-punk band Panic! At the Disco (P!ATD) formed in 2004 in Summerlin, Las Vegas. ALthough P!ATD transformed from a garage band to selling out arenas, members have come and gone during that time frame. Despite all of the changes, lead singer Brendon Urie has remained the one constant in P!ATD, and he isn’t going anywhere anytime soon.

Beginning with manipulated/choppy vocals, “Say Amen (Saturday Night)” immediately made me roll my eyes, as this beginning is very frequently seen in ‘pop-punk’ band Fall Out Boy’s most recent album; my eyes just couldn’t help themselves.

As the song continues, the chorus swells, reminiscent of “Victorious” off of P!ATD’s most recent album, Death of a Bachelor—except “Victorious” is actually a good song. While the chorus is catchy, the savior for this song is lead singer Brendon Urie’s high-note at the end of the final chorus.

Despite my dislike for the song, I can’t deny the music video is awesome. It begins with a clip of a newscaster discussing a stolen ‘Devil’s Key.’ As robbers dressed in all black and ski-masks make their way around Urie’s home, Urie’s phone buzzes with a text message.

Suddenly, Urie appears, wearing the stolen key, and unafraid of the robbers. One-by-one, Urie harms each robber with his bare hands. As his date appears, she knees him the groin as he hits his high-note, then proceeds to beat him to a pulp and steals his key.

“In My Blood” and “Lost In Japan,” Shawn Mendes

At only 19-years-old, pop artist Shawn Mendes has achieved success that thousands of artists can only dream of; he’s headlined three tours of his own, topped the Billboard Hot 100 chart at number one three times, released two extremely successful albums, and won 40 awards out of 134 nominations.

On March 22, 2018, Mendes released the lead single from his upcoming third album, “In My Blood.” The next day, he released “Lost in Japan,” second single.

“In My Blood” is the most mature song Mendes has ever released, in terms of both lyrical content and production. “In My Blood” details Mendes’s struggle with anxiety.

Sticking to his roots with an acoustic track, Mendes sings with passion. A haunting drum pattern builds up to an ‘eh’ chorus, but I hold the bridge close to my heart.

At first, I hated “In My Blood.” The first thing I thought of was ‘boring,’ but now, it’s grown on me to a 3.5 / 5. As someone with anxiety, I appreciate its lyrics, especially, like I said before, the bridge.

“Help me, it’s like the walls are caving in… I need somebody now,” hit home for me. I remember being in seventh grade, crying on the bathroom floor in the middle of the night, having my first ever panic attack over going back to school after missing a few days because I was sick, and my mom was there.

Though my mom and I have our moments (our fights), as every mother-daughter pair has, my mom has been the one person I go to when I can’t sleep, or I have intense anxiety ab

out school, or I did something embarrassing, and I need to talk to someone.

However, “Lost in Japan” is not a song that I would connect to my mother at all.

Beginning with piano, “Lost in Japan” shapes into an R&B-influenced track, as opposed to rock ballad, “In My Blood.”

Japan,” Mendes suggests flying “a couple hundred miles” to meet up with his love interest, all while “getting lost in [their] paradise.” ‘Nuff said.

Production-wise, the snaps and funky strings add a level of interest, and the bassline is groovy as hell.

“Don’t Give In,” Snow Patrol

(I was going to cover “Life on Earth,” however, it is so painstakingly boring that I don’t want to write about it.)

Released March 21, 2018, rock band Snow Patrol attempted to make their comeback with the pathetic “Don’t Give In.”

I am so inexplicably bored with this song. Lead singer Gary Lightbody’s scratchy, weak voice sounds like nails against a chalkboard in this song. I’m not feeling the electric guitar at the end of the bridge, and the deplorable lyrics point in a direction that I’m just not on board with.

For Snow Patrol’s first new music since 2011, I am not impressed. The band who created the masterpiece that is their fourth album, Eyes Open, wrote this? This is what we call a downgrade, worth a 2 / 5.