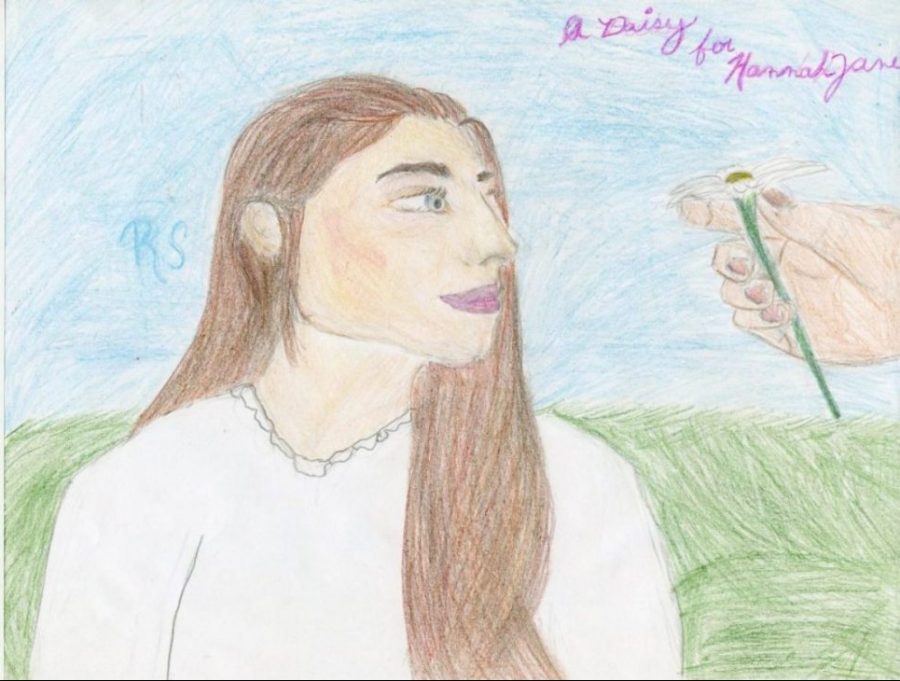 A Daisy for Hannah Jane

Everyone and everything, from the church belltower beyond our dirt roads to the fish in the neighbors’ pond, was just plain fine. All seemed right in the world.

The meadowlarks were singing their little beady heads off as the clouds churned themselves overhead. I could hear the rich children laughing and playing down the street, and horse hooves bearing a harmonious clip-clop sound grazed the newly cobbled road.

All seemed right in the world.

As if on cue, Harriet stomped into the yard and stopped at my beloved apple tree I sat under, journal and pencil in hand, and hollered a steady stream of good-natured, rapid mountaineer scolding before I got a chance to notice her grayish-brown hair whitening. “Janieyougitbackherethisminuteandpickupev’ryoneofthosehorseshoesbeforeIgitmad!”

It was like she had her own language that only I could understand. Even Jamison, of all people, had a hard time translating Harriet’s dialect.

“Yes, ma’am,” I replied, giving her the kind of smile that got under her skin. “It was Mr. Jamison who was playing horseshoes with Caleb earlier, but I’ll be the dutiful child you practically raised.”

She rolled her eyes and stomped away. I think she liked the sound of her feet thumping on the neatly-clipped grass.

It was satisfying to stomp, so I did so. I stomped to the place where the horseshoes lay, overlooking Caleb’s gorgeous, flowery garden a hill below. It reminded me of the garden I’d created at the house Raymie and I were going to live in once we were married. It was the hidden garden where Raymie and I would’ve been blissfully married in, the same one I had shown to the Jamisons. Who turned out to be Raymie’s mother and brother.

What a tough life we live. And we don’t even know when our boys get back from the war. God, we need our men back. Then it hit me: If Raymie had miraculously escaped (Only God knows how he did it!) and didn’t die from war, would Jamison have to go fight? How does it all work? If only I was wiser about the worldly things. All I knew of were the things that no one seemed to care about. Not land, not politics, not wealth or prestige or inheritance. I cared about people. About humanity and its goodness, as well as its bad sides. Why do the politicians think killing each others’ men actually solve problems? I intended to ask Jamison later. He seemed to have all the answers.

…Except for where and who The Men were. He hasn’t been home since six o’clock this morning. I am beginning to miss him around the mansion, unemployed or not. Grandmother should start paying him for the effort he’s been putting out. After all, she won’t bleed dry even after she’s buried in the most extravagant grave ever made. And I mean that in the least morbid way.

Besides that, I was sure my grandmother did take a liking to Jamison. He was kind and considerate, and he was eligible enough, if he were to get a fine-paying job. He was obviously devoted, I guess… I don’t really know how we had grown to love each other. “God’s blessing” is what he would say.

Retrieving the U-shaped pieces of rusty metal, I guessed who had thrown which color. The paling blue ones were nowhere near the stake, which the fading red ones were close to actually “hugging” the stake. I could just see the look on Jamison’s face when Caleb got all the good shots. Of course Caleb was the one who’d thrown the red.

“Miss! Miss Hannah Jane!” someone cried, startling me. I barely had the time to turn around when Ethel came bounding up the hill from the house, running as fast as her house shoes could carry her. Her skirts raised just enough to see her ankles, hand on her head to keep her cap atop her thick hair, the other being used to propel her up the hill, which clasped what looked like a telegram between her delicate fingers.

“Ethel, what’s wrong? Did something happen?” I demanded, leaving her to bend over in fatigue and pant her way back to regular blood flow.

“This thang came for ye, few minutes ago,” she rasped breathlessly, using homey dialect she was most likely raised with. I had always heard her speak with a voice of intelligence, but now… Now it seemed what the telegram said was too important for intellectuality.

“Alright, Miss Hannah Jane.” Her serious voice trembled like an autumn leaf in the wind. “But I think you should put those horseshoes somewhere so you don’t drop them on your feet when you see this.”

I swallowed and did as she said. “It’s urgent?”

She nodded, breathing hard and fast. “Read it. Please, miss, I can’t bear it. I know I wasn’t supposed to, but it wasn’t sealed and — ”

“I don’t care. You’re fine, Ethel, but you’re going to have to deal with my heart attack if you don’t give me that slip of paper.”

She thrusted the telegram at me, waiting anxiously for my reaction. I’d never seen her so nervous. I think I saw her twitch.

CHARLES D. JAMISON, JR., IS UNDER ARREST FOR

I felt my heart nearly drop out of my chest. Involuntarily, I dropped the telegram and it floated to the grass. I sat there for a long time before looking to Ethel, who shook her head in empathy. “What are you going to do?” she asked softly.

“I am going to fetch my granny. Take care of the horseshoes, please.”

I burst into the first parlor I saw when after sprinting to the mansion. With my luck, she was sewing there. “Grandmother, please come with me to the station! There’s been a terrible incident!”

“Hannah Jane Caroline Lewitt! How dare you slam my doors and interrupt — ”

One look at me and the silent exchange of the awful telegram told her all she needed to know. “Tell Harriet to get the fastest horses for our coach. And make haste,” she told a maid standing nearby, who ran off to find Harriet like a deer fleeting to berries.

My grandmother folded the telegram and picked up her parcel. “Get your walking shoes, Janie.”