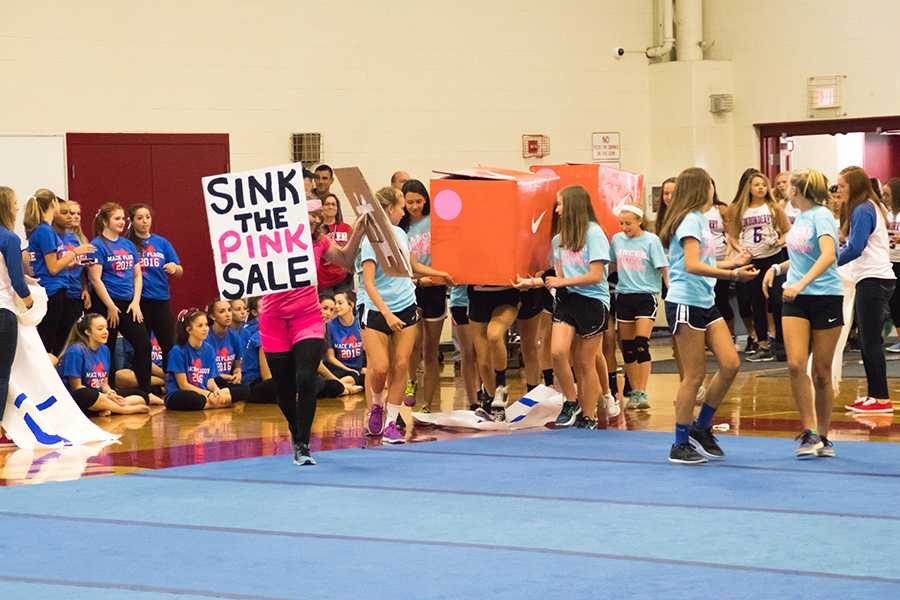 Girls' cross country takes the floor in a creative skit at the Mack Plaque pep rally in the fall of 2016.

The Mack Plaque pep rally this past fall might’ve been the worst in LHS history.

This event leading up to the most anticipated weekend of the year for Lancer athletics lacked spirit and put many students in extremely uncomfortable situations. But now, five months later, the repercussions of this failure are just being felt, and the actions of a few students are negatively impacting the entirety of Lancer Nation.

When the pep rally team began preparations for the winter pep rally, the now infamous pep rally rules paper was distributed to athletes playing winter sports. There was a new addition though: athletes will no longer be taking the gym floor performing creative skits. Instead, the rules sheet states that teams “will enter to the school fight song… break through [their] banner, then find a place on the floor.”

It’s hard enough to get the student body on their feet for one performance of the school fight song. Now, kids will be slumping through the same tune a whopping eight times as athletes drag their feet to a spot on the gym floor.

Yes, this fall, a student was thrown to the ground and ended up in urgent care—indeed a “safety hazard,” as the skits have been deemed. But an isolated incident by a handful of players on a single team does not call for judgment of Lancer Nation as a whole.

The pep rally team acted rashly by removing skits from the pep rallies altogether when there was clear room for compromise.

In the past, according to current LHS athletes, skits had to be approved by absolutely no one before they went into action on the floor, and previous pep rally rule statements contained phrases like “use common sense” or “see Mr. Juster if you have any questions” to guide the students creating skits.

There’s no way to measure those standards. With such loose regulations and extremely unclear consequences, it’s challenging to hold students accountable for their behavior and nearly impossible to punish students fairly when it’s necessary.

Instead of ridding the pep rallies completely of one of the students’ favorite parts though, the pep rally team did have other options. They could have worked with the administration to create a clear and consistent policy, set rules for pep rally skits that includes oversight, and determine consequences for athletes who choose to disobey their regulations.

If these individuals found a middle ground and made each team put plans for their skit in writing, it would allow admin and the pep rally team to preemptively oversee what plays out on the gym floor. It would show planning and hold students accountable for their actions; it would benefit everyone involved, but this time they took the easy way out by cutting skits totally, and a consistently interesting and exciting part of the pep rallies has been removed.

Pep rally aides meet to run through their script the week of the pep rally anyway, so it wouldn’t even be challenging to have teams share their ideas or present their skits for approval on that same day. That way, the people who need to keep the pep rallies under control know exactly what to expect on the big day, athletes feel confident and rehearsed, and pep rally aides can be more relaxed, knowing that their music transitions and banner placements would run smoothly.

However, when the new rules paper was released the pep rally team, headed by Mr. Juster, stated on the sheet that athletes would take this news about no skits as a “relief” and that the pep rallies will still be “high-energy.” This just doesn’t seem like it will be the case.

If the athletes don’t have this freedom of expression anymore, shouldn’t the dance team, cheerleaders, band, and drumline be silenced as well? How is it fair to penalize athletes and leave musicians, dancers and other groups to go about their routines with no changes?

If a privilege is taken from one group, it should be taken from them all because each aspect of the pep rally has always been equally important at LHS.

Winter athletes like senior Max DesRosiers have been looking forward to their entrances for months. DesRosiers said he was excited to take the floor with boys’ basketball, but without a unique skit, that enthusiasm has been lost.

Senior girls’ basketball player Olivia Yerian is also disappointed to take the floor with her teammates for the final time in such a boring fashion.

Lancer Hockey’s skit has always been a crowd favorite, but this season we’ll have to miss out on whatever dance or movie spin-off the boys had planned.

Some single sport varsity athletes wait for this chance to express themselves in front of the entire school all year long, and now that opportunity is gone.

But it didn’t end with the athletes. Students across all grades, clubs, and backgrounds openly expressed their dissent for this decision the day the news broke. Photos of the updated rules sheet appeared on Snapchat stories from freshmen to seniors. Pep rally skits became the topic of conversation in the hallways, at the lunch tables, and at home with family that night.

Junior wrestler Mike Watts even began a student petition publicized through social media and created on change.org against the removal of skits from the pep rally, and over 300 students in LHS signed in the course of six hours. The petition may have collected more signatures but was taken down when Watts received an email from Mr. Parent who offered a productive meeting to discuss pep rally skits. Watts closed the petition with the statement that it was a “victory.”

Watts was thankful for the opportunity, and students with little connection to athletics at LHS showed their support for the inclusion of skits in our pep rallies and Watts’ efforts.

Pep rallies have always been about the whole student body, not individual parts. Pep rallies are run by students, with students center stage, for students to show their spirit in unique and creative ways. Skits have proven to be a significant piece of that, and therefore, they should stay.