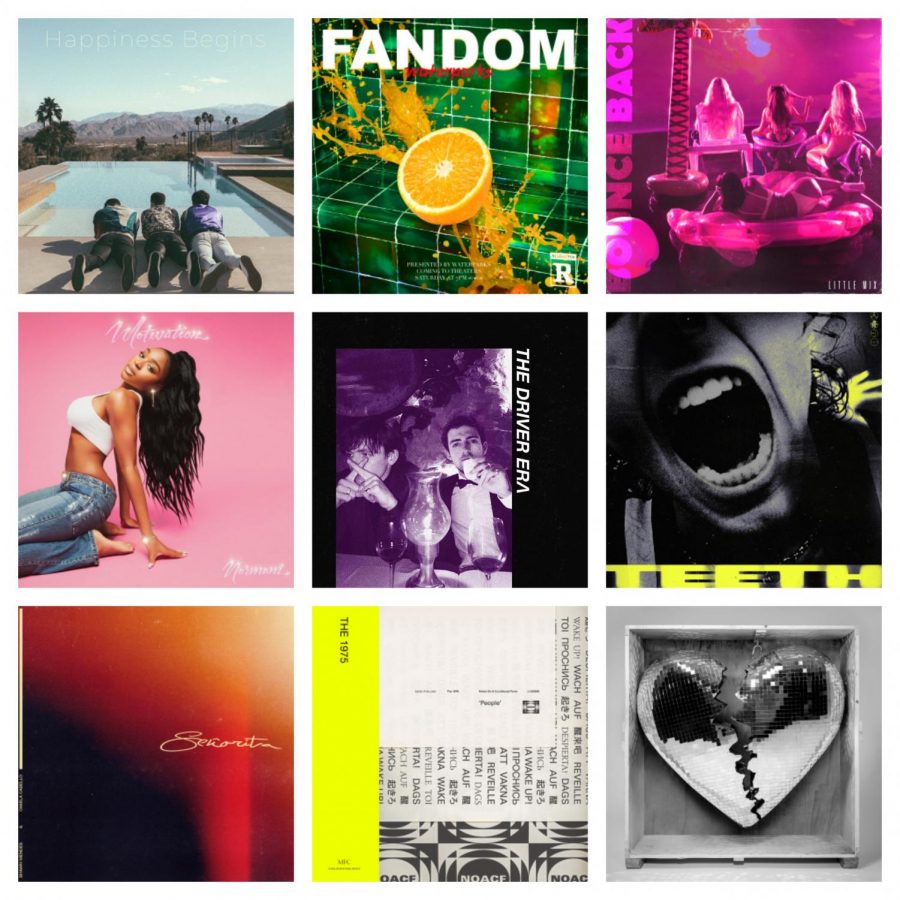 All images were obtained from the artists' Spotify.

Unfortunately, back-to-school season is upon us. However, I’d like to take a moment to look at some of the wonderful music of summer ‘19 that will keep me going as I cry over the copious amounts of homework I now have to do. I have separated this article into two parts, the first consisting of albums, and the second, songs. All music included in this two-part article was released from June 1, 2019, to Aug. 23, 2019.

Happiness Begins – The Jonas Brothers
The Jonas Brothers found their start fourteen years ago, in 2005. For six years, the three brothers, Joe, Nick and Kevin, continued to make music, and the three found success through their original music, as well as acting opportunities with Disney.

In 2011, however, the band took a hiatus, allowing time for each member to branch out and explore their individual careers. When the brothers toured from 2012-2013, creative differences caused deep rifts within the family band; as a result, in 2013, the band split. Now, in 2019, The Jonas Brothers have released their fifth studio album, Happiness Begins, the first in a decade.

Beginning the new era, the Jonas Brothers released “Sucker” as the lead single in March. I’ll be honest, I was never a Jonas Brothers’ fangirl, as I was a bit too young for them during their Disney days; Big Time Rush was more my style. However, I can’t say that I didn’t join in on the hype for the return of the Jonas Brothers as a trio, and I wasn’t disappointed. For a track about being so infatuated with someone that you’re willing to do anything, the instrumentals have the same enticing effect as the lyrics. The production is crisp. The claps and short continuous bursts of guitar drive the chorus, whereas the funky bass builds anticipation. Not only does the song flow nicely, meaning there are no awkward transitions between each verse, but I find the song so enjoyable and catchy that I come back to listen often.

Unfortunately, I cannot say the same for “Cool,” the second single from Happiness Begins. While the brothers reflect on their achievements during the band’s hiatus, the bright acoustic guitar and claps contradict each other, making the song unpleasant to listen to. Also, Kevin’s electric guitar solo post-bridge clashes with the summery vibe of the song, and I’m just not into it. At all.

I am, however, very into the record’s slower points. “I Believe” is heaven to me. The instrumentals are euphoric: drums that propel the song’s direction and have my head swaying; soulful piano; flexible, ringing electric guitar that feels so atmospheric; and the layered vocals that sound smooth and sensual. I get lost in this groovy track every time I listen, and I love how the instrumentals embody the whirlwind romance story between Nick and Priyanka Chopra.

“Hesitate” is Joe’s love letter to Sophie Turner, and it gives me goosebumps. It’s very barebones, featuring only gentle, heartfelt guitar; vocals; and light drums later. Nick and Joe sing, “I will take your pain / And put it on my heart / I won’t hesitate,” and my heart clenches at this tender and sweet song about wanting to help your significant other through difficult times.

Finally, “Strangers” is fantastic. The drums are vibrant, and coupled alongside these hauntingly nostalgic synths and resounding bass, I easily fell for this track, which had my name written all over it.

For the most part, I do enjoy the more upbeat tracks, but each comes with its flaws. “Only Human” is fun with its horns, anticipatory drums, and keys reminiscent of The Little Mermaid’s “Under the Sea.” But, there’s this weird audio effect on the vocals that hinders my enjoyment, and the beat drop is kind of lame. “Don’t Throw It Away” has a blissful chorus with a good combination of sentimental guitar and nice falsetto from Nick and Joe, but the clapping in the verses is distracting. The instrumentals of “Happy When I’m Sad” contrast each other, with the slinky bassline and funky percussion in the verses, but lively synths and aggressive guitar/drums/bass in the chorus. This isn’t actually the problem here, though The problem is that “Happy When I’m Sad” and “Don’t Throw It Away” don’t sound all that different, so much so that I used to get them confused. So, while I enjoy all of these tracks, they’re not quite the 10/10s I was giving earlier.

While the album’s greatest moments truly do shine, what remains is not particularly enjoyable, or good. For example, “Used To Be” combines acoustic guitar, rolling beats, heavy bass, and a strange twang in the vocals from Nick and Joe. The Jonas Brothers tried, there was an attempt to make a sentimental track combining trap elements, and it’s god-awful.

Additionally, some songs feature sub-par lyrical content, “Every Single Time” and “Love Her” being the worst offenders. Besides the cheesy references, such as “Mr. Misdemeanor” and “Miss Sentimental,” I feel as if I’ve heard each of these songs before, as in there’s nothing special or unique about them.

With all that said, I give Happiness Begins a 6.5 / 10. I’m not quite sure what the plan for the Jonas Brothers is after the Happiness Begins tour concludes, perhaps if they’ll be returning to their solo projects or not, but I do look forward to what could be in the future, if the brothers continue to make more music.

X – The Driver Era
The Driver Era began as R5 in 2009. Over an eight-year period, the band, composed of four of the Lynch siblings (Riker, Rydel, Rocky, and Ross) and a family friend (Ellington), released two albums, toured multiple times, and released several EPs.

However, in 2018, the band was rebranded as The Driver Era, now only composed of Rocky and Ross Lynch. The three other members, Riker, Rydel, and Ellington, were only to continue playing with the band during tours. Now, in 2019, The Driver Era has released their debut album, titled X, and I couldn’t be more in love.

Short and simple at only 10 songs in 35 minutes, X combines a wide variety of topics and tones into a cohesive body of work. This is especially impressive considering almost all the writing, production, and music was constructed entirely by Ross and Rocky; they may have been in the industry for a long time, but this is no easy feat, and they crushed it. There’s not a single song that I hate, and I find myself coming back to this record often.

Sure, there are some weaker moments. “Nobody Knows” and “Scared of Heights” are enjoyable, but they’re just meh. “Low” and “Afterglow” are suspiciously similar and struggle to find some individuality. And, some songs just fail to top the greats on X.

For example, “Feel You Now” is incredible. I’m taken on a journey each time I listen, starting with the sharp bassline and Ross’s spliced vocals that provide an intense, rebel-running-away-in-a-chase-scene vibe. But, then, the chorus’s blurts of saxophone, gang vocals, claps, and sinuous electric guitar infiltrate the atmosphere I spoke about earlier. I can’t help but sing along, and “Feel You Now” might just be my song of the summer.

Additionally, “San Francisco” is emotional and tender. As an introspective track about falling out of love, “San Francisco” is dreamy and mellow, with these expanding drums bits scattered throughout, whimsical electric guitar solos, and lax percussion. Ross sings, “You know we suffocated our love / You really didn’t do anything wrong… baby, we overplayed our song,” and my heart just breaks.

X starts and ends very strong. “Welcome to the End of Your Life,” the intro track, is best described as a jelly donut: When you take your first bite of the donut, there’s nothing but the dough and sugar, the middle is packed with sweet jelly, and the end is just the same as the beginning. “Welcome to the End of Your Life” begins and ends with lonesome acoustic guitar and vulnerable vocals. However, the middle bit of the song introduces screeching electric guitar; desperate, almost-yelling vocals from Ross; and distorted vocal snippets that give “Welcome to the End of Your Life” more of an edge. Track ten, “Preacher Man” was released as The Driver Era’s debut song, and I love it. The claps, striking piano, and empty percussion build up to the energetic, fun post-chorus, full of cut-up vocal bits and “ooh”s.

Overall, The Driver Era took R5’s sound and lyricism, matured it, and made the sensational debut record that is X. From the soft moments, like “Low” and “San Francisco,” to the lively ones, such as “Nobody Knows” and “Natural,” I was invested from track one to ten. The Driver Era has teased a 2020 tour, and I will be there, screaming my little heart out to the 9 / 10 album that is X.