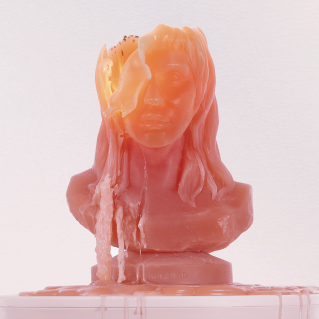 A candle modeled after Kesha burns as the cover artwork of 'High Road.' The album was released Jan. 31, 2020, has sixteen tracks and five features.

Kesha’s career has been a long, winding path up a certainly steep mountain. From 2010’s party girl phase (Animal and Cannibal) to her raw, soul-bearing third album, titled Rainbow, Kesha has consistently delivered in all her musical endeavors, even with a troubled personal life.

2020’s High Road continues that streak, effortlessly combining the virtue of Rainbow, the fun of Animal, and the magic of Kesha.

I won’t lie, there are a few bumps in the road. “Little Bit of Love” sounds like a Sara Bareilles reject from 2007, and “The Potato Song (Cuz I Want To)” is, quite literally, clown music. Additionally, “My Own Dance” is clunky and the generic version of “Raising Hell” (which doesn’t come without its own problems; Big Freedia telling me to “drop it down low… [and] hit the floor with it” diminishes the uplifting message).

However, even with that being the case, I can’t fault “Raising Hell.” It’s entirely, unapologetically, 100% Kesha, just as the rest of High Road is. Kesha reclaims the wildness that propelled her to success on the shamelessly fun moments, and she continues the rawness that gained her critical acclaim on the tender ones.

Though the lyrics are questionable at times, “Birthday Suit” is full of personality—in a good way. I can look past the debatable components, even the repulsive Mario snippet, for the electrifying pre-chorus. “Kinky (ft Ke$ha)” possesses the same cheekiness. The charged plucks of bass and synths are too catchy for their own good.

But, unabashed pop isn’t the only box Kesha checked. “Cowboy Blues” is a reflective, ukelele-led song, in which Kesha retains a charming candor as she asks, “Do you ever lie in bed with your three cats / And get obsessed with some boy you met / One time, three years ago in Nashville?” God, I love this woman.

“Resentment (ft. Sturgill Simpson, Brian Wilson, and Wrabel)” is just as heartbreaking. For such a sad track about falling out of love, the palpable chemistry between these four artists just makes me more emotional. Also, “Father Daughter Dance” is the most personal, well-written song on High Road and leaves no eyes dry as Kesha sings, “I don’t even know if I wanna have kids / I don’t want to f*** ‘em up the way you did.”

However, “Honey” is the odd duck out—a song about a friendship that ended over Kesha’s “sloppy seconds.” It has a 90’s girl group feel, which is only furthered by the grossly misogynistic lyrics. Kesha speaks about being stabbed in the back with “your stripper shoe,” and her ex-friend can be found “up on the discount rack, right at the back of a TJ Maxx.” Sounds just like Kesha’s feminist, empowering agenda, huh?

It’s especially frustrating considering “Honey” comes directly after four, back-to-back tracks about being yourself and finding confidence in what makes you different. Sure, not all of those four do a great job of encouraging the listener to find their own magic, but they certainly don’t slut-shame or critique others. In fact, “High Road” advocates for caring less about what people say, and “Shadow” sees Kesha taking the high road.

She sings, “Go get your shadow out of my sunshine… I’ma love you even though you hate me.” Considering her legal troubles with her former producer (who I won’t name), Kesha taking the high ground is admirable and requires a lot of courage.

Kesha dropped her California lawsuit in 2016, but the legal battle still continues. Unfortunately, her former producer will still make a profit from High Road. The judge’s ruling and the fact that Kesha’s abuser is still benefiting from her work is exactly why victims of abuse (mental, physical, sexual or a combination of the three) don’t speak up. Kesha represents the women who don’t have the resources or the support to do so through her music, both on Rainbow and High Road.