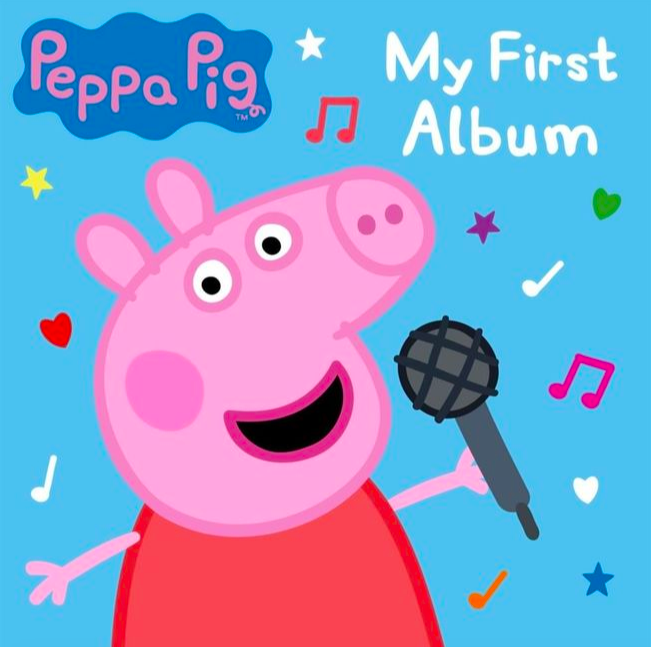 Peppa Pig poses for the cover artwork of her debut record, 'My First Album.' The record was released July 19, 2019, and features 16 tracks.

Peppa Pig has been starring in her self-titled children’s cartoon since 2004. For over 16 years, short songs have been sprinkled into episodes to further Peppa’s messages of love, happiness, and family values, and after years of the Peppanators begging for more, Peppa has released My First Album. Peppa’s music is ostensibly meant for kids, but I ask: does she mean to say more?

The opening track “It’s Peppa Pig” sets the mood. The bright keys juxtapose the low-toned horn, and the occasional shimmering synth affirms the warm sound. The consistent sound is just as strong as the most prominent theme: taking care of yourself, both your mental and physical health.

Ms. Rabbit stars in a trilogy about anxiety. “Busy Miss Rabbit” introduces the protagonist Ms. Rabbit and the immense amount of stress she feels daily. Peppa explains the cause of Ms. Rabbit’s anxiety by showing how her worries can build up until they hit a breaking point, singing, “Everyone’s being as loud as they can /And now we have a traffic jam.” However, “Balloon Ride” reminds Ms. Rabbit (and the listener) to take a step back and acknowledge the true insignificance of some stressors, as Peppa remarks, “[Problems] look so small from up here.”

Peppa continues to promote healthy coping mechanisms in “Let’s Get Ready!” as she leads a choir while they chant, “Wash, wash, wash your face / Wash it nice and clean / Scubbily, bubbly, bubbly, scrubbily / ‘Till you’re nice and clean.” Energetic and danceable, “Super Potato’s Theme” features marching band-esque drums as Peppa enthusiastically cheers, “Wiggle your hips and do our jive!” to support healthy eating.

Unfortunately, Peppa’s tracks on physical and mental health are the only lyrically strong moments on “My First Album.” As the record continues, Peppa leaps from one complex theme to another. Though she mostly dissects each with ease, Peppa overestimated the amount of care needed to fully develop such complicated ideas.

For example, “Jumping in Muddy Puddles” is Peppa’s first jump—pun intended—into politics. Peppa acknowledges the murky, divided state of politics by comparing them to a muddy puddle. However, Peppa encourages the listener to get involved in politics and fight for their beliefs, even if it may seem daunting.

As much as the message is important, Peppa takes a half-baked stance that could have been stronger. She didn’t devote enough time and attention to the politics she was discussing, which leaves the listener with a feeling of whiplash as she jumps from a track about politics to showing her support for the LGBTQ+ community on “Rainbow, Rainbow.”

“The Class of Madame Gazelle” briefly considers the importance of education, and “Expert Daddy Pig” is a reminder to love and appreciate those in your life, even with all their flaws. Additionally, “Bing Bong Zoo” is a commentary on the cruelty of zoos and entertainment companies that employ animals, such as traveling circuses, Sea World, etc. As Peppa attempts to convey with her jaunty claps, captivity often leads to a declining physical and physiological health in the animals, just like it does in humans.

While I admire Peppa for taking on such daunting topics, a certain level of effort must be put into discussing them—unfortunately, she lacked the effort on this debut. Overall, however, My First Album is refined, polished and feels like a warm hug. Despite the confusing tracklist, Peppa made the effort to comment on pressing social issues, even if her commentary was sometimes halfhearted. I am absolutely looking forward to what will be coming soon; perhaps My Second Album will grace the world with its presence.

We have no choice but to stan.