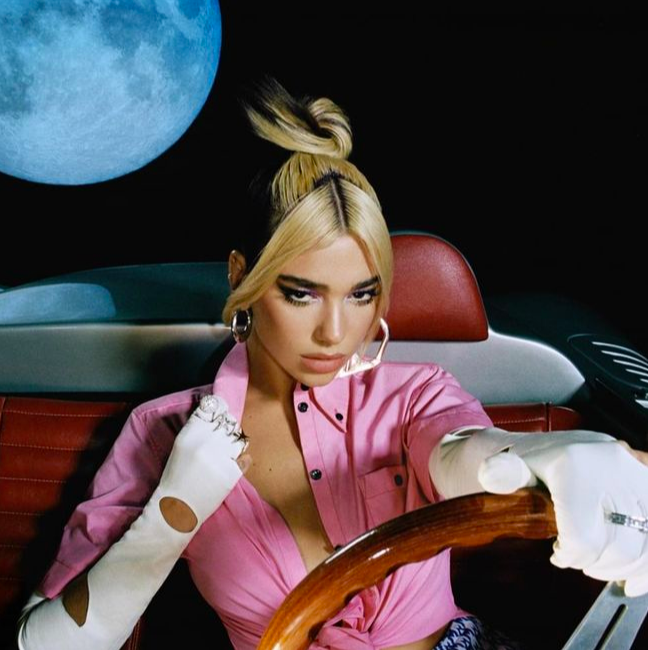 Dua Lipa models for the cover photo of 'Future Nostalgia.' The album was released March 27, 2020, and has 11 tracks.

Dua Lipa captured the world’s attention with the nearly inescapable, summer smash “New Rules” in 2017. She continued the streak with 2018’s “One Kiss” with Calvin Harris, and alongside a slew of other hits from her self-titled debut (such as “IDGAF” and “Blow Your Mind (Mwah)”), Lipa was awarded the Grammy’s Best New Artist (BNA) award in 2019.

There is, unfortunately, a curse often associated with the BNA—that the winner will no longer reach the heights of success they once had and, essentially, fade into nonexistence. One member of the Starland Vocal Band (who won the BNA in 1977) even called the award the “Kiss of Death.” The curse seems to have fixated its magic on winners Alessia Cara (2018), Esperanza Spalding (2011), Norah Jones (2003) and more.

Lipa, however, is here to stay, with her career on a steady incline. She just reached her highest spot on the Billboard Hot 100 at number two with “Don’t Start Now.” The disco track blew up on TikTok, its clean production and empowering message boosting its popularity. Lipa sings, “Did the heartbreak change me? / Maybe, but look at where I ended up” — TikTok famous, with an incredible sophomore album. The rest of Future Nostalgia, released Mar. 27, 2020, is just as fantastic as “Don’t Start Now.”

The electrifying “Hallucinate” will get stuck in your head, and “Levitating” is pure magic—the jaunty, sweet swings of guitar and ringing synths create a lively atmosphere, aided by Lipa’s cheeky delivery. “Physical” could be a Halloween staple; the darker sound, with its airy percussion and reverberating synths, combines with the adventurous lyrics to form that classic Halloween vibe.

However, up-tempo, fun songs aren’t the true stars of Future Nostalgia, and neither are the mid-tempo tracks. It’s the concepts hidden behind the catchy hooks and earworms that set Future Nostalgia apart from its competitors. Lipa set a goal for herself to update and personalize an old style; she flawlessly achieved that. Future Nostalgia is a callback to the synth-pop, new wave standards of the 80s. Lipa counters that nostalgia, though, with lyrics that discuss modern issues, like feminism and sexuality—issues too sensitive and forward-thinking for the 80s.

For example, “Break My Heart” samples 1987’s “Need You Tonight” by INXS. After some sprucing from Lipa, a once lust-ridden track became one about finding power within vulnerability. Additionally, “Good In Bed” dedicates itself to Lipa’s sexuality, discussing the sense of empowerment it gives her.

Most importantly, though, Lipa touches on feminism and misogyny. On “Future Nostalgia,” the wonky sound effects, winces of guitar and gritty synths make for an exuberant chorus as Lipa defines her place in the music industry, singing, “I know you’re dying trying to figure me out / My name’s on the tip of your tongue, keep running your mouth / You want the recipe, but can’t handle my sound… I know you ain’t used to a female alpha.” Also, the closing track, “Boys Will Be Boys,” is a powerful commentary on the sexism women face daily. In time with the hollow plucks of violin, Lipa sarcastically adds, “I’m sure if there’s something / That I can’t find the words to say / I know that there will be a man around to save the day / And that was sarcasm, in case you need it mansplained.”

Overall, Future Nostalgia is an impeccable record, with its clean, innovative sound and sharp lyricism. At the beginning of the album, Lipa remarks, “You want what now looks like, let me give you a taste.”

9 / 10
Give Future Nostalgia a listen yourself!