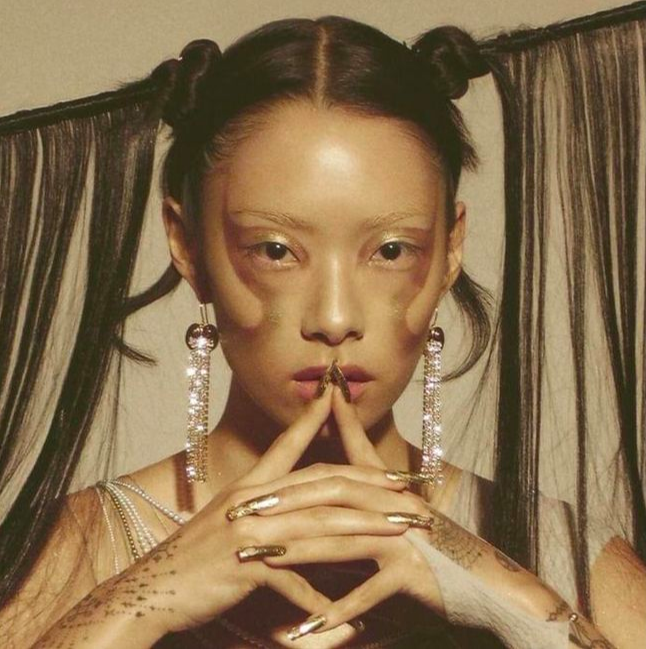 Sawayama poses for the cover of her self-titled debut record, 'SAWAYAMA.' The album was released April 17, 2020, and features 13 tracks.

Rina Sawayama has never been one to shy away from difficult topics, usually hidden in disguise by a fun sound. From her debut, “Sleeping in Waking,” which dealt with depression, to the RINA EP’s exploration of fame, relationships, and the media, Sawayama has made it clear that she can and will use her voice to speak up.

The promising singles released before Sawayama’s debut, SAWAYAMA, were no exception to this.

Immediately, each single captivated me. With its delicate blend of nu-metal and pop, “STFU!” instantly appealed to the angsty, punk-rock-loving side of me. Sawayama unloads all of the pent-up anger she’s held in for years over the racism and microaggressions she’s experienced; it’s cathartic, in a way, and I absolutely love it. “Comme des Graçons (Like the Boys),” clearly influenced by the early 2000s, is pure fun. The up-in-the-club feel and effervescent bass practically command you to dance along. “XS” is brilliant, from the seamless combination of pop and R&B to the acute lyrics that analyze our obsession with wealth and overconsumption.

Everything was going so well. Until “Chosen Family.”

Don’t get me wrong, it’s a cute ballad. Sawayama sings about these unbreakable bonds she has with her friends—you know, “We don’t need to be related to relate / We don’t need to share genes or a surname / You are… my chosen family”—but it’s incredibly cheesy, and there’s this weird synth that sounds like an alien that constantly appears in the background, which truly ruins the entire song for me.

Personally, “Chosen Family” was a bit of a wake-up call that my expectations for SAWAYAMA were too high. To be honest, I don’t really know what I was expecting from this album, but overall, I didn’t get it, whatever “it” was.

On the other hand, I must admit that SAWAYAMA is an incredible body of work, mostly because Sawayama is an excellent writer. For example, Sawayama explores her roots as a British-Japanese immigrant on “Akasaka Sad.” Underneath the futuristic sound lies haunting lyrics about a self-identity crisis. As Sawayama details, she doesn’t feel at home in Britain or Japan, but she still harbors a love for her culture and background. Yet, as she explains in “Tokyo Love Hotel,” Sawayama feels almost uncomfortable including her culture in her music. She clarifies that she doesn’t want to further the fetishization of Tokyo and Japanese culture that has ensued over time, especially in recent years. Self-identity and cultural appropriation are complex issues that Sawayama manages with an ease I’ve never seen before.

In addition, SAWAYAMA is cohesive, both sonically and lyrically. “Paradisin’” is a video game chiptune about teenage rebellion, and yet it perfectly completes this puzzle. One would think that these completely different pieces, like “Dynasty” (a grandiose track about intergenerational pain) and “F*** This World” (which addresses climate change in a nicely-packaged, calm fit of rage), wouldn’t combine well, but Sawayama executes it all flawlessly.

Therefore, from a critical standpoint, SAWAYAMA is fantastic. It’s everything I could ever dream of: a cohesive, well-written pop album with a pretty bow on top.

However, from a listener’s perspective, I feel… disappointed? I wanted more. More of what, exactly? I can’t tell you. SAWAYAMA is not the kind of music you can just play in the background, and unfortunately, I don’t see myself coming back to this album.