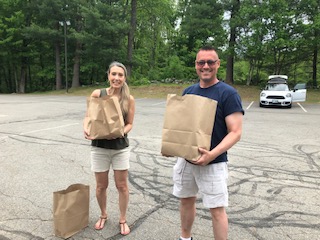 Two volunteers from Londonderry Christian Church help bring bags out to the families in need during their “every two week” pick up drive-thru on Thursdays.

In the midst of COVID-19, Londonderry and the entire state of New Hampshire has been in “stay at home mode” for the past three months. These times have been rough for almost everyone. Many people and families lost their jobs and are struggling financially, some might  even have to choose between paying rent and having food on the table for their next meal. It might be hard to believe that such a thing happens in Londonderry, but it does.

Even before March 13, the last day of regular school, there were students in Londonderry who needed help making sure they had food over the weekends.  Now, it is even more imperative than ever that those children get the food and resources they need, considering school may have been one of the only places in their lives where finding food was not an issue.

“There has been an increase of people in our program,” Yakey said. “Especially because a lot of people were worried about getting food and physically going to the store.”

Yakey also explained how things have changed in the past few months and how the restrictions imposed by this pandemic have affected the program here in Londonderry. This resulted in roughly 10 more kids/families being added to the program. This leaves the program packing 61 bags for drop-offs.

Typically, all 61 of those bags go home once a week on Friday in the hands of students ranging from first grade all the way up to eighth grade. Those children aren’t going to school anymore, so Yakey and her team of volunteers had to find a new way to get the food to the children and families.

“We are dropping off [bags] at people’s homes because the buses aren’t running anymore,” Yakey said. “This can kind of help exposure because people aren’t out as much.”

Also, to help out with the stress of feeding all the children and families in the program, Yakey has the assistance of some teachers from the various schools in Londonderry that take part in the program, which include North School, South School, Moose Hill, and the Middle School.

First grade North Elementary School teacher, Cindy Bartholomew, has really “helped out a ton at North and has done a lot to get the program there”, Yakey mentioned.

Thanks to all the hard efforts of the volunteers at Londonderry’s Ending 68 Hours of Hunger program, all the children from the northern tip to the southern tip of Londonderry will have food on the table.

Also, thanks to some grocery stores nearby, the program has been running swimmingly and, more importantly, safely.

“What has been great is that Hannaford, Market Basket and Shaws have donated paper bags for us,” Yakey explained. “They are a little larger than the ones we normally use, so we can put in two weeks of food in there.”

With the larger bags, Yakey and her volunteers have been able to add just a little bit more to each one. This can range from an extra box of cereal, to a tube of toothpaste, or just the bottle of soap that is so hard to find nowadays.

“We add the normal amount of food and products, and since people have been donating hygiene products, this means we now put toothbrushes, toothpaste, shampoo, [etc.] in the bags,” Yakey said. “Basically, what is in the bag is what they should expect to get, and then we try to put in a little bit more.”

Plus, Yakey can sometimes add some extra pasta and sauce in a bag or an extra box of mac and cheese, which gives that family another meal. This not only serves as a buffer in their system to make sure no one goes hungry, but it also lends a sense of security to that family.

Also to keep all the families safe in their home, Yakey and her volunteers follow the strict guidelines, provided by the CDC, to keep everyone safe and virus free.

“We have switched from plastic bags to paper bags, as what has been recommended, and we also wear gloves when we are packing the bags,” Yakey said.

Yakey and the volunteer who packs with her have both been quarantined since the start of all of this, which is one of the best ways Yakey can help protect while still providing for all of these families.

Due to Yakey and her volunteer prepackaging all the items in the bags days before they are sent out, families and their children have less exposure as well. Plus, according to a study done by the New England Journal of Medicine, the virus can live on cardboard surfaces for 24 hours, but by allowing the bags to sit, untouched by Yakey or her volunteers, they can be somewhat certain that they are keeping people safe both from the virus and hunger.