15 songs about equality and anti-racism to listen to 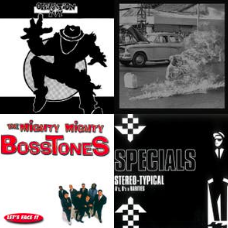 All images via Spotify.

There is a lot of rage in our nation right now, so this playlist of unity was compiled to bring hope and to reflect on our world—after all, that’s what music is all about. Humanity has always turned to music, and whether happy, sad or angry, there is always something for you. These 15 songs may not all be classics, but they all provide messages that our country needs right now.

#2) “Let’s Face It” – Mighty Mighty Bosstones
In the Bosstones’ title track off of the album, “Let’s Face It,” lyrics of anti-hate are featured throughout. Though written in 1997, all issues being combatted in this song are still prevalent in our world today. The ska sounds of this song are fun and bouncy, while the lyrics fight for equality for all.

#3) “Unity” – Operation Ivy
Unity portrays the exact message you would expect. Operation Ivy’s punk rock instrumentation sheds light on the fact that there is hate in the world, and we can stop it by coming together and standing as one. We live in a divided world, and this song shows that if this continues, it will just lead to our destruction.

#4) “Ghost Town” – The Specials
This song brings an eerie vibe with it, describing a city empty due to riots and violence. Though recorded in 1981, we can see what this song is describing in our very own country. The two-tone genre of this music was apart of a large movement of equality and unity in the UK.

#5) “Don’t Drag Me Down” – Social Distortion
Ignorance and hate over race are the main themes found in this Social Distortion classic. This song shows that the reason racism still exists is because our history books in school fail to show the atrocities that were committed by our forefathers. Racism is ignorance, and until people are taught this, it will just continue.

#6) “Wake Me When It’s Over” – The Cranberries
In this song against violence, singer Dolores O’Riordan tells the listener that fighting is not the answer. Now I’m not trying to make the point that rioting is not the answer, because clearly it has been helping, but the point of this song is that endless fighting will destroy us all. This goes for both sides, racism is part of that fighting; if racism never ends, that is a problem. What is needed is peace and understanding from everyone for our human race to progress.

#7) “Mr. Cab Driver” – Lenny Kravitz
Kravitz directly addresses racism in this track, saying, “Mr. Cab Driver, don’t like my kind of skin.” This song is simply about the prejudice that he received from a cab driver. This does not mean it is only about that one occurrence, but about how many black people get stereotyped because of the color of their skin.

#9) “Subliminal Fascism” – Fishbone
Fishbone has always been strongly against the inequality in our nation, as seen in “Subliminal Fascism.” This is about how the government is secretly trying to control people and while people think they are in control, they are not. This song is about basic rights and needs. Fishbone also puts on crazy shows, and you can tell by listening to their music.

#10) “WMA” – Pearl Jam
This Pearl Jam song describes being born white as winning the lottery. It tells a story from singer Eddie Vedder’s life, in which as he was sitting outside next to black man, police came along and started hassling the black man. Eddie was completely ignored because he was white, while the completely innocent man next to him was harassed.

#11) “Face Values” – The Suicide Machines
The Suicide Machines have been very active, as of late, in protests for equality. This song shows their feelings through lyrics such as, “Alright, no need to fight, ‘cause everybody’s different and there’s nothing you can do about it.” Though this does not fight against race as much, this song does make the point that everyone should be themselves and not worry what everyone else thinks about them.

#13) “If I Can Dream” – Elvis Presley
In a song performed in his gospel era, Elvis delivers one of the best singing performances ever, in my opinion. This song describes the singer’s dreams of a world where there is peace, understanding and love. This emotional piece brings hope, yet sadness with it, in a truly remarkable adaptation of the song originally written by Walter Earl Brown, featuring direct quotes from Martin Luther King Jr.

#14) “Imagine” – A Perfect Circle
In this cover of the classic John Lennon song, A Perfect Circle perfectly changes the once hopeful sound of the original into one seeming like a cry for help. The eerie sound displays the feelings that many have on how are current nation looks.

#15) “The Garden” – Rush
“The measure of a life is a measure of love and respect. So hard to earn, so easily burned”—this lyric perfectly describes the point of this song. I close the playlist with this track off of Rush’s last studio album from 2012. The emotional lyrics puts life in perspective and gives a reminder of one of many of Martin Luther King Jr.’s great quotes, “I have a dream that my four little children will one day live in a nation where they will not be judged by the color of their skin but by the content of their character.”

Listen to these songs below!