‘The Lighthouse’: A confusing but intriguing movie 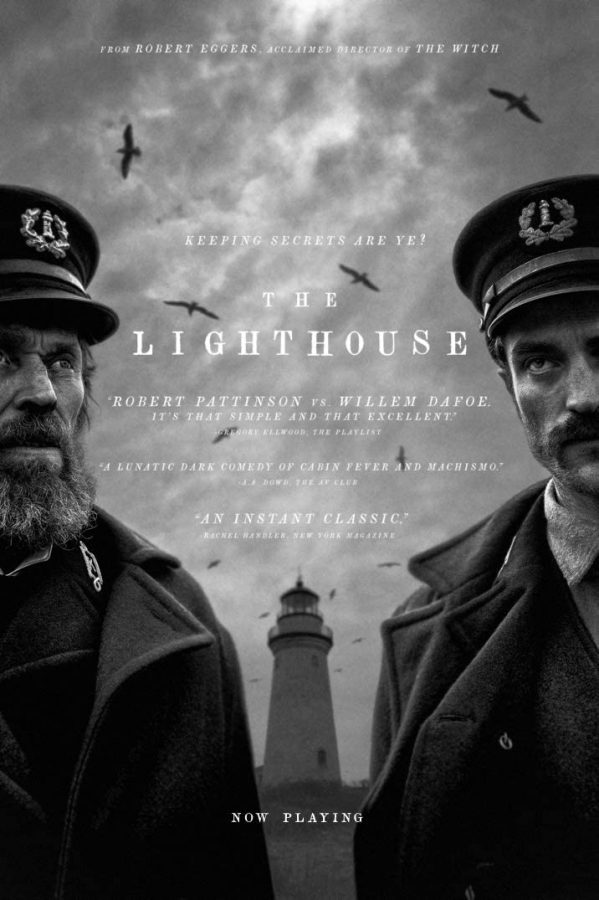 A poster for 'The Lighthouse.'

Sitting back after finally watching The Lighthouse, directed by Robert Eggers, I honestly don’t know what to say, as I have barely a clue as to what happened in this movie; however, I will go over what I can say about it as best as I can.

The movie takes place at, you guessed it, a lighthouse in the late 19th century in a random island off of New England where Ephraim Winslow (Robert Pattinson) joins with the old keeper of the lighthouse for a simple 4-week job. The older keeper, Thomas Wake (Willem Defoe), is a long-bearded, old sailing captain who often tells Winslow old sailor sayings, stories and superstitions. Slowly, Wake forces the new Winslow to do much of the heavy work on the island, putting a strain on their relationship that soon exacerbates itself when he refuses to allow Winslow near the light for seemingly no reason at all, which plays a key plot point in the movie. When the day comes for Winslow to leave, a horrible storm comes, stranding him there with low supplies for an unknown amount of time; this is when the movie begins to pick up.

One of the first noticeable things you see when the movie starts is its presentation. The entire film is shot with traditional film to emulate the 1930s, with the black and white coloring and 1.19:1 aspect ratio helping. Also, the lighting and camera settings made the scenes dark and gloomy, so only the characters were in focus. This brings The Lighthouse an older feeling, so much so that my sister asked, “Isn’t this a newer movie?” It is—it was released at the latter end of 2019, and if you want to watch it, it’s available to stream on Amazon Prime.

Also, there is a distinct use of sound, including the lack of it, throughout the film. For the first seven or so minutes, not a word is spoken. Just fog horns and sounds from the characters’ actions can be heard, and this creates a tension between the two main characters that can’t be done in other ways.

The movie is classified as horror, but it’s not like traditional horror films because it deals more with the psychological horror that comes from the isolation of being alone on an island with only one other person. The movie’s R rating comes from scenes that are of the more explicit variety, which I wish not to delve into, but these scenes easily skippable and don’t add much.

Additionally, as the two main actors, Pattinson and Defoe do exceptional jobs in their roles. The pair are the only actors for ~97% of the film, and their talent is easily demonstrated by the fact that both of them have been nominated and won mutiple awards for their performances.

Overall, The Lighthouse is a remarkable movie by cinematography, acting, and presentation standards, but the plot can be quite confusing. I even put my phone into another room, so I would not be distracted during the movie, but I was still left somewhat confused as to what exactly happened, which is, unexpectedly, a good thing.

The viewer can feel the confusion and strain of the characters, as the viewer, too, is confused about what happened. Often, some scenes play out, and the viewer won’t understand it at first, but will later realize what happened. Plus, sometimes, the mania of Winslow is shown briefly, making the viewer as suspicious of the light and the old keeper as Winslow is.

I was drawn to watch this movie because, right now and during this whole quarantine, we too are “isolated” and “alone,” but with the movie, these feelings are dialed up to the maximum.

So, in short, The Lighthouse is an interesting film with great cinematography and use of sound and shots. The exceptional acting brings forth a great movie, despite being sometimes crude and confusing; this leaves the viewers just as confused as the characters are. I’d recommend it to anyone who wants to see something different and is also interested in putting the pieces of the mystery together at the end of the movie. Here is a trailer for the movie if you would like to see it.