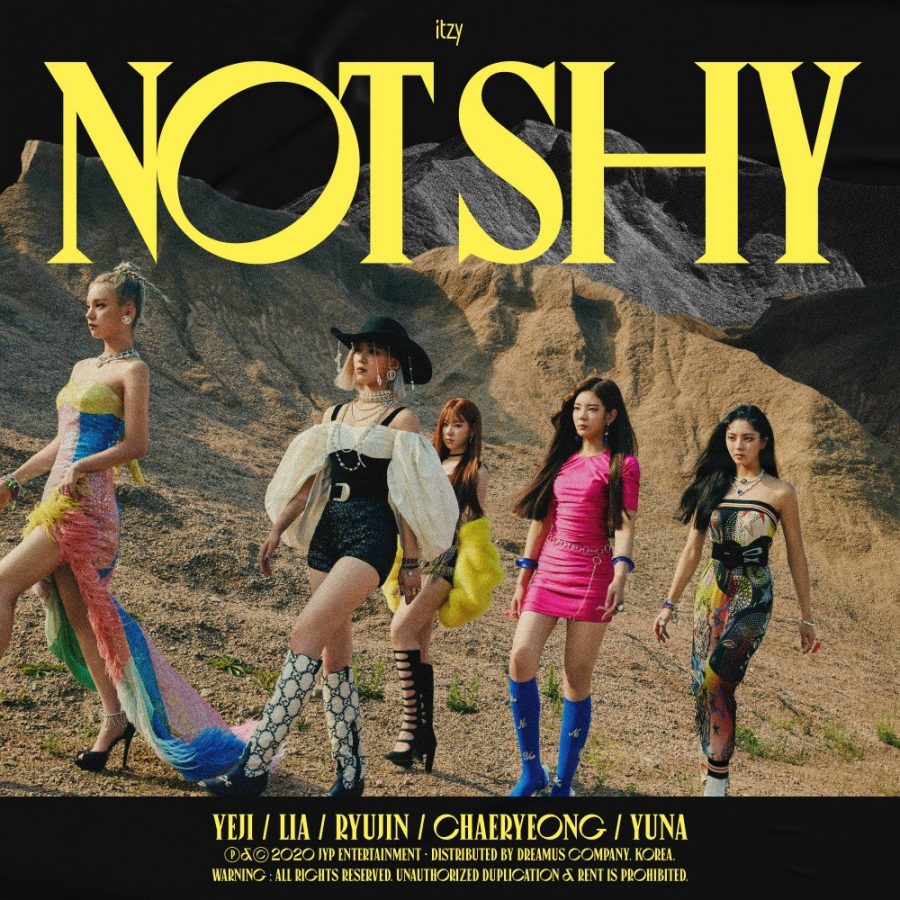 ITZY pose for the cover artwork of "Not Shy," their fourth comeback single and second EP. The single and EP were released Aug. 17, 2020, and the group's four weeks of promotion ran through Sept. 13.

K-pop girl group ITZY finished their four weeks of promotion for their newest single, “Not Shy,” just a few days ago. During these promotional weeks, the girls of ITZY—Yeji, Lia, Ryujin, Chaeryeong, and Yuna—performed “Not Shy” on several different music shows, with each performance (or “stage”) featuring various matching outfits. The fashion choices made by ITZY speak almost as loudly as their music, and I thought it would be fun to do something different: instead of reviewing their music, I’ll provide commentary on their fashion choices for each of the promotional “stages.” I’ve ranked the performance outfits from worst to best, and this article will be split into two parts, with the first discussing the bottom eight performance outfits, and the second, the top eight outfits. This is part one.

Before I get started, a quick disclaimer: I’m not a fashion expert by any means, and I know that fashion is 100% subjective. These rankings are solely my opinion, and they are based purely upon the outfits and how much I like each of them—or, in some cases, dislike them…
#16) Show! Music Core – 9/12/20

I’m going to preface this stage, as well as the outfits for the following two performances, by making it clear that I really don’t like schoolgirl-inspired looks. With the schoolgirl aesthetic, there’s not a lot of variety, and it leaves the members wearing almost identical outfits. Though intentional, it’s not very eye-catching, and to me, it indicates a lack of inspiration. It’s an ITZY tradition for the last few stages to all be schoolgirl outfits, and sure, it’s kinda cute, but it’s also the greatest way to end without a bang.

With all that said, let’s take a look at this particular stage. I like the custom jackets, so it’s a shame that they’re tied to the most boring outfits. I mean, the only differences in these outfits are the t-shirts, socks, and sneakers that each girl is wearing. But, if you think about it, the t-shirts are covered by the jackets, and nobody is paying all that much attention to the socks and sneakers each girl is wearing. Overall, I find these looks forgettable, at best.
#15) Inkigayo – 9/13/20

Seriously? These copy-paste, bland outfits are what we got for the last performance of this promotion period? I mean, I like the Mary Janes and personalized blazers, but paired with basic black safety shorts? There’s nothing intriguing about that. Why not experiment with a variety of bottoms, from wide-leg pants to a dress, to bring some excitement to this lackluster stage? Why not incorporate more of the emerald green and navy blue from the blazer in the bottoms or jewelry? Give me something more exciting and memorable than black safety shorts.

Of the three schoolgirl stages, I liked this one the best. The girls are all wearing the same pants, which creates a sense of uniformity, but the tops are unique and different from one another. Lia’s top, in particular, was my favorite; the juxtaposition of the masculine (the pants and the collared shirt) and feminine (the denim corset and chunky, layered jewelry) elements easily puts this as my favorite outfit of the bunch. I also really like Chaeryeong’s beret and off-the-shoulder top.

When it comes to this Inkigayo performance, the actual ranking of these outfits is more like this:

Yuna’s outfit in this performance is, quite possibly, my favorite of all the ones she wore this era. Those color-shifting, red-blue pants, the white boots, the single black glove? This look is simply exquisite, it perfectly encapsulates the fire-and-ice theme, and it’s a damn shame that it will always be remembered as the only good outfit in the hell-fire that the rest of this stage was.

While Yeji’s outfit matches the theme, her “skirt,” if you can even call it that, looks more like a belt. As a general rule of thumb, if I can see an idol’s safety shorts more than I can see the actual piece of clothing, it’s not a good outfit. The same goes for Lia, whose outfit only ranked higher because I liked the cohesion between the “dress”—once again, if you can even call it that—and the white, lace-up boots.

Meanwhile, Chaeryeong looks like she’s about to join the Plastics on stage to sing “Jingle Bell Rock,” with the red latex dress, fur trim, and tall black boots; the only thing that’s missing is a Santa hat. Finally, Ryujin looks like the stylist forgot to make her an outfit, so they threw her in one of the rejected denim outfits from the next stage…
#12) Music Bank – 9/11/20

Why does there always have to be a stage with denim outfits? Seriously, why? I mean, poor Yeji is stuck in a denim corset, straight-leg jeans, and thigh-high boots MADE OF DENIM, which is entirely too much denim on one person.

As for the rest of the outfits, they’re too casual-looking for a performance. Concerning Ryujin, I like the matching patchwork between her top and jeans, but the dark wash of her jeans and neon colors don’t fit with the other four outfits. Lia’s two-piece, lilac top perfectly complements her, but the piping on her jeans is hideous, so Chaeryeong’s outfit won out in this scenario. Last but definitely not least, Yuna undoubtedly has the best outfit here. The continuity between the glittery dangle earrings, belt, and patches of glitter on her jeans tie the whole look together, and overall, Yuna’s colorful bandana top is what makes the rest of the outfits look cohesive. My only critique would be the yellow boots; though they bring in Ryujin’s outfit nicely, the yellow completely clashes with the blues, pinks, and purples of the rest of Yuna’s outfit.
#11) Inkigayo – 9/6/20

These outfits are just so boring. I really don’t have much to say, other than the fact that I would have liked them better if there was more glitter.
a
a
a
a
a
aa
#10) M Countdown – 9/10/20

This is an example of a schoolgirl look done well. There’s a distinct concept and color scheme, but there’s still a sense of individuality from girl-to-girl; it’s a difficult balance to find, but these outfits manage it really well. With that said, Yuna and Lia are both wearing a simple, pleated black skirt and plain tops that just fall short compared to what the other girls have on. Not only do I prefer the patterned skirts that Chaeryeong, Yeji, and Ryujin are wearing, but I’m also obsessed with Ryujin’s sequined, cherry top from Gucci.
#9) Show! Music Core – 8/22/20

From the hair piece to the chaps, I love how the glitter flows between the different pieces of Yuna’s outfit; it looks carefully designed and executed, unlike the glitter on the other four outfits. In fact, Yuna would have been first if her chaps weren’t cut open at the bottom of the legs because, while I love Lia’s pants and the zipper detailing, the glitter looks crooked, messy, and cheap.

Ryujin, Yeji, and Chaeryeong are all wearing variations of the same romper, but I liked the contrasting cut-outs and cowboy boots of Ryujin’s outfit the best. Yeji and Chaeryeong’s outfits are pretty equal in my eyes; Chaeryeong is only last because I didn’t like her cowboy boots.

These outfits are creative, original, and inventive, but the more I look at them, the less I like them, and the glitter is definitely at fault. These outfits look great with a quick glance, but the second you start to look at the details, it all falls apart.