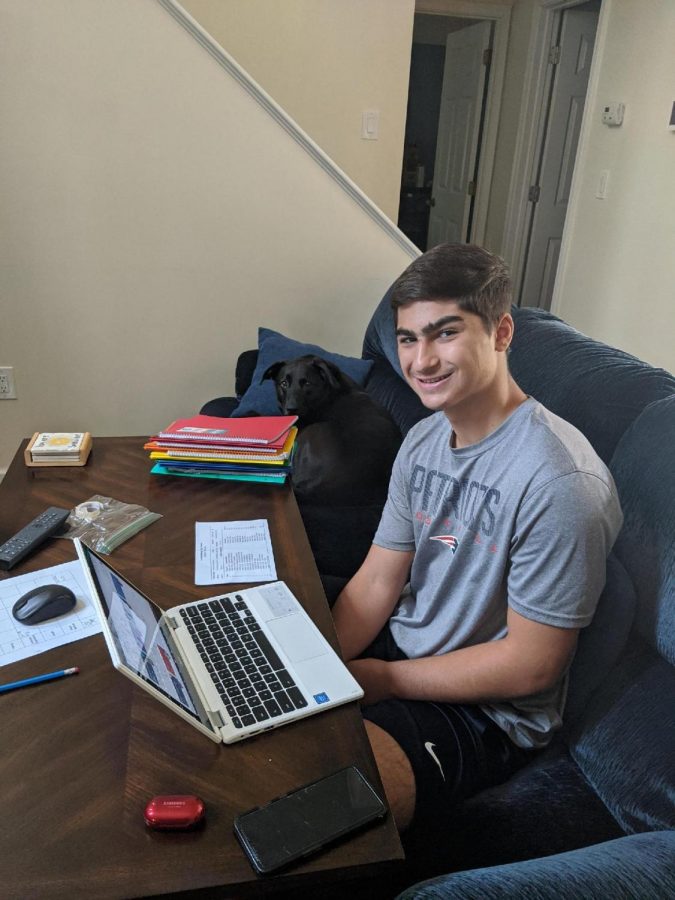 Junior Christopher Merheb works on schoolwork from his living room.

To say the reactions to how this school year is going so far are varied would be a grave understatement. If you listen to people talking in the halls, you’re bound to hear the spectrum of opinions. Regarding hybrid, students fall into a few different camps: those who despise the way things are going, people who like the hybrid system better than normal school, and people who are completely neutral. Here are some examples of students that fall into each of these “camps”.

It’s not working:
Some students, like junior Jade Leblanc, are having a rough time with the change in routine.

“Initially I thought it was a good idea, but then I actually got into it and I realized that this is terrible for me,” Leblanc said. “The way I learn is to actually see it and be able to ask questions at the time, but a lot of teachers wouldn’t get back to me until the next day.”

Other students, while maybe not struggling as much with the academic side of things, might be dealing with the consequences on the social end.

“It’s just been a lot harder to make plans to see people who go on the other days,” freshman Emma Kling said. “It’s like there’s this big gap. Even in the cafeteria, everyone is so far apart.”

A big part of hybrid that students seem to overall enjoy is their remote day schedule being their own.

“Online days feel like mental health days,” senior Emily Nowak said. “You make your own schedule, and I genuinely think it, at least for me, increases my productivity, and I have a lot more free time too.”

There’s also the fact that much of the student body uses these remote days as their “homework days” as well, leaving their afternoons mostly free of school. There’s more time for students to do what extracurricular activities are still happening, to go to work and still have time of their own, or just to take a nap and watch TV.

Then there are students, such as sophomore Talia Barnoy, who are somewhere in the middle of this spectrum of reactions.

“My first thought when I found out remote learning would go on through the end of the year last year was that it would be really bad, but I definitely loved it more as it went on,” Barnoy said. “It was nice having my own schedule and not having to worry about others opinions and drama on top of school.”

As Barnoy said, it has taken some time for students to adjust to the new format of schooling, but people are making it work in their own ways.

“It’s definitely been hard to adjust to the back and forth of it all,” junior Christopher Merheb said. “It just feels so random. I do like getting to plan ahead for my week, though.”

Changes in the building:

There have been many changes made to the physical building, and as far as rules and scheduling goes, people have figured out what their favorite and… less adored things about hybrid learning are.

The general consensus has been that the one-way traffic in the lobby, and no eating or drinking rules have hit the hardest among students. Especially those that can’t take mask breaks outside because of a lack of time, or those without a free period. And then, on the social end, lots of kids feel disconnected from the half of the school that goes on the opposite day from them.

The thoughts on this schooling method also vary depending on the students’ scheduling. So far, students seem to think that the STEM classes have been, and will continue to be, the hardest to transfer to the hybrid system. Meanwhile, language arts, foreign languages, and other classes along those lines will adapt much better.

From freshmen to seniors, everyone has been adjusting to the changes differently. Some people have been accommodating them better than others. If we do go fully remote it’s clear that a lot will have to change again, but if what’s happened in the last month is any indication, it should go as well as anyone could hope.

And I’d like to take a moment to commend everyone; students, staff, and admin alike, for taking all these new things in stride, and remaining safe and positive in these trying times. The amount of effort everyone is putting in to making this year go smoothly is astounding. There’s no way Lancers will go down without a fight, even with the odds stacked against us this year.

How are you dealing with these changes? Comment below to let us know how you’re handling academics in the pandemic!