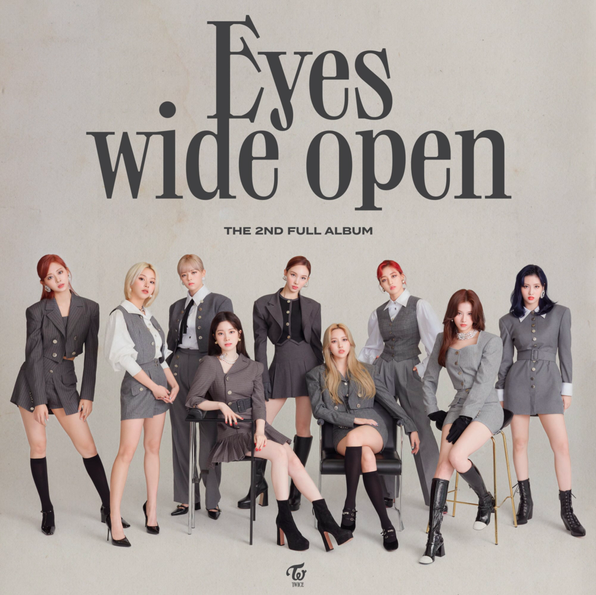 Since their debut in 2015, K-pop girl group TWICE has become an international sensation. Originally known for their girly-cute concept, for which they saw massive success with “Cheer Up” and “TT,” TWICE—composed of Nayeon, Jeongyeon, Momo, Sana, Jihyo, Mina, Dahyun, Chaeyoung and Tzuyu—gradually transitioned to a more mature concept, with smash hits like “Fancy” and “Feel Special.” Most recently, they released their sophomore album, Eyes wide open, and instead of reviewing the record as a whole, I’ve decided to rank all thirteen tracks from worst to best.

#13) “Shot Clock”
Loud and proud, “Shot Clock” is the only song on Eyes wide open that I actively skip. There’s a theatrical feel to this track, from the boisterous horns and militaristic drums to the energetic vocals and repetitive lyrics. While I’m all for a lively musical number, “Shot Clock” is like a troll doll in a sea of Barbies—it just doesn’t fit. The lyrical content isn’t at fault; love is a common theme on this record, and though the metaphors are a bit childish, they match the song’s tone, which is where the issue makes itself very apparent. Every other song on Eyes wide open has a mature, graceful feel, but “Shot Clock” is shouty and abrasive, making it both unlistenable and seem like it was tacked onto the project at the last minute.
#12) “Behind the Mask”
To be completely honest, I’ve only heard “Behind the Mask” three or four times, and I just don’t like it. I can’t force myself to listen to the entire song. The pre-chorus irks me, as you can clearly hear the girls straining, and overall, it’s melodramatic and forgettable.
#11) “Believer”
“Believer” is, sonically, a hot mess. Just thinking about the obnoxiously bright piano and modulated audio samples make me shudder in disgust. This song is choppy, loud and a track I never hesitate to skip.
#10) “Depend on You”
This song sounds like it came straight from 2014. The soft, keyboard-led instrumental, swirling guitar in the post-chorus drop and even the loving message all could have made this track a Katy Perry B-side six years ago. While not automatically bad, EDM trends from the early 2010s aren’t really my speed.
#9) “Queen”
Who doesn’t love a self-empowering bop? Written solely by Dahyun, “Queen” is the perfect reminder that, “No matter what people say, / You’re the way you are / You’re a queen.”
#8) “Do What We Like”
“Do What We Like” is mellowly energetic. The snappy, on-the-ball percussion and jumpy synths (energetic) are softened by the lukewarm drop and breezy vocals (mellow); together, these contrasting elements create the baseline for a peaceful, temperate love song where the lyrics (written by Sana) take charge. While the instrumental may fade into the background, it’s impossible not to sing along to, “Say you won’t let me go / I won’t let you go / And we do what we like.”
#7) “Hell in Heaven”
Enigmatic. Dazzling. Sensational. All fantastic descriptions of “Hell in Heaven.” Not only is the storytelling impeccable, I simply cannot get the hard-hitting drums, deep passes of synth and inviting vocals out of my head. Seriously, when I’m trying to fall asleep at night, all I hear is Chaeyoung’s “Deal with the devil / A-yah-yah ooh,” because it (and “Hell in Heaven,” in general) is addicting.
#6) “Bring It Back”
I’ll tell you what, Dahyun took no prisoners with her work on this album. “Bring It Back” is a bold, confident breakup song about recanting your love for someone, and while the writing can certainly stand alone, TWICE absolutely embodies this concept. Chaeyoung and Dahyun’s rap verse, Nayeon’s high note, the pre-chorus’s sassy vocals… need I say more?
#5) “Up No More”
“Up No More” sounds elegant and expensive, from the lightly dancing guitar and rubbery bass to the expressive vocals and smooth atmosphere. In contrast to the pricey-sounding production, a penny for Jihyo’s thoughts gifted us the heartbreakingly beautiful lyrics about insomnia and sleep anxiety. Hidden underneath the joyful instrumental, the girls sing, “Alone in this night covered with thick darkness, / I can’t turn off my day that’s still bright… I’m taken away / By the trivial thoughts in my head… I don’t even know since when / But [sadness] has seeped into me… I don’t wanna be up, up all night again.” I’ll always love a song to cry-dance to, and as the sad bop that it is, “Up No More” is practically begging for me to do so.
#4) “Handle It”
Though it’s more moody than “Up No More,” the cry-dance party only continues on “Handle It,” a lush city pop track. The emotional pleas and hauntingly descriptive metaphors, wonderfully written by Chaeyoung, are masked by the sleek vocals and harmonies, piercing waves of guitar, and overall, a lively atmosphere.
#3) “I Can’t Stop Me”
As much as I hate to admit it, “I Can’t Stop Me” is definitely trend-chasing. With the wave of 80s-inspired, synth-pop tracks that have flooded the music market this year, it didn’t come as a surprise that TWICE was going to have a retro concept, especially after the success other K-pop groups have seen with the same concept (such as EVERGLOW with “La Di Da”).

Nonetheless, I love “I Can’t Stop Me,” which definitely gives off an action-movie-montage-wherein-the-protagonist-prepares-to-battle-and-take-down-the-villain vibe. The boxy beat and mild-mannered, sour-sounding synths are carried by the performance, from the choreography to the vocals. The vocal runs by Nayeon and Jihyo in the final chorus continually amaze me. The vocal patterns linger in my mind; I could be taking a test, and suddenly, the only thought my brain can produce is, “Allami ullyeodae, ring, ring-a-ling.” The rap verse—which features all three of TWICE’s rappers for, quite possibly, the first time ever—is catchy as hell. And, the choreography and styling during the live performances? Incredible.

Sure, “I Can’t Stop Me” is nowhere near being TWICE’s best title track, but it’s definitely not the worst. Plus, coming after “MORE AND MORE,” which was a huge disappointment, I couldn’t have asked for anything better.
#2) “Go Hard”
I mean, the title pretty much says it all; “Go Hard” is such a banger. The pre-chorus excellently builds up to the oriental, almost creepy drop that, while predictable, actually does the song a big favor because it adds to the bold, dauntless feel. Singing along to Sana and Tzuyu’s determined and confident vocals in the pre-chorus truly reminds me, “Even if you shake and push me, I’m unbreakable / My only worthy opponent is the woman in the mirror.”
#1) “Say Something”
Why, right now, am I not in New York City, at a fancy restaurant with a bluely-lit fish tank, beautiful crystal chandeliers and brick walls with wooden floors, at midnight?

Because that is exactly the atmosphere that this track calls for. Gorgeous and jazzy, “Say Something” proves that TWICE and city pop are a match made in Heaven, because this is the song that plays when you enter Heaven. The pleasant bassline washes along the magical, drifting horns, gleeful guitar and whimsical harmonies, not to mention the saxophone solo that literally made me gasp the first time I heard it. In other words, “Say Something” is delightful, enchanting and (easily) my favorite song on Eyes wide open.

Overall, Eyes wide open is a cohesive, well-written blast from the past, with the 80s-inspired synths and city pop influences that, though following trends, show TWICE at the top of their game. 7.5 / 10
Give a listen to Eyes wide open below!