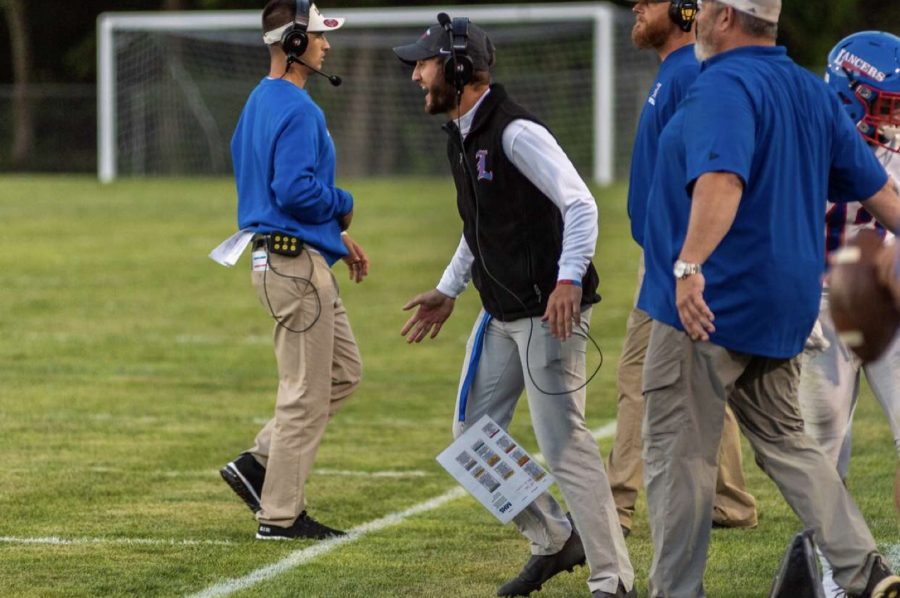 Londonderry High School said their heartfelt goodbyes to nearly 20 retiring staff members at the end of the 2020-2021 school year, but are giving a warm welcome to all of their replacements this fall. The English department gains a member, Mr. Zachary Capobianco.

Capobianco, better known as Cap, has been a substitute teacher for nearly three years at LHS and onto his third season of coaching the varsity football team. When it was time to make a decision about which school would be lucky enough to have him on staff, there was no doubt which one Cap was choosing.

“I didn’t choose LHS, it more chose me, I guess,” Cap said. “I was kind of backed into the situation, because [LHS] is home.”

As Cap went through his college experience, he never thought he would become a teacher after he graduated. After completing his undergraduate program studying communications and psychology at Saint Vincent’s College, Cap used substitute teaching as a sort of “sabbatical” from school while trying to get money to pay for graduate school.

Subbing allowed Cap to come in contact with some prior connections from when he attended school here. But out of all of them, there is one woman, in particular, to thank for getting Cap to come back to his alma mater, Michelle Hart-Miller.

“I was just going to take a few months off and figure out what direction I wanted to go,” Cap said. “And I had played and coached football when I was in college in undergrad, and [Miller] said ‘Oh the football team is looking for a coach, maybe you could do that while you figure it all out’ and I said ‘Alright, yeah that sounds good’.”

Cap continued to live in Londonderry and commute to graduate school at Boston College, which allowed him to sub while he pursued his master’s in theology. Academia was still not quite on his radar when studying theology, but he enjoyed the community aspect.

“I really liked working with young people and building a community where people could be enriched,” Cap said. “And teaching is a really good form of that, without getting into the religious aspects of [theology].”

Coaching and subbing after going to grad school helped Cap realize that the two were “very meshed together” and got him ready for teaching students.

“What studying at Saint Vincent’s and Boston College did prepare me for was to ask those deeper questions and learn how to guide people to make connections and think for themselves,” Cap said. “And to get kids to understand that critical thinking and creativity and emotional personhood all connect together into the person you are.”

Looking ahead during his first year as a full-time teacher, Cap may have a little bit of a different approach to the year than other teachers. Having “goals” for the year is not something that is appealing to him.

“I am much more process-oriented in my approach. So I guess if I were to have a goal it would be to make my teaching process as robust as I can for the kids,” Cap said. “I want every kid that I teach to have a good experience and to come away a more enriched person than how they entered.”

Having the capability to design his own curriculum after being confined to the lesson plan of the teacher he is subbing for that day allows Cap to connect his classroom with the things he learned during undergraduate and graduate school.

“The thing that appeals most to me about being a teacher is the mentoring aspect and the ability to build an intentional community and through that help shape kids for life,” Cap said. “Especially in humanities, like English, you are able to ask deeper questions and think about what it means to live a good life. Right at the level of formation where [the students] are about to become adults. That is really really important and I am excited to do that as a full-time teacher.”

After being able to only build relationships on the football field, Cap is “most excited” for the ability to build those relationships with all his students, not just the athletes.

Most teachers have lots of expectations for their students when they enter their classroom, but Cap only has one thing he wants students to do as they go through the school year with him.

“I ask [my students] to keep an open mind when they come into my classroom,” Cap said. “It is my job to give you an enjoyable experience in my classes. So if you open the door, we can have an engaged positive experience.”