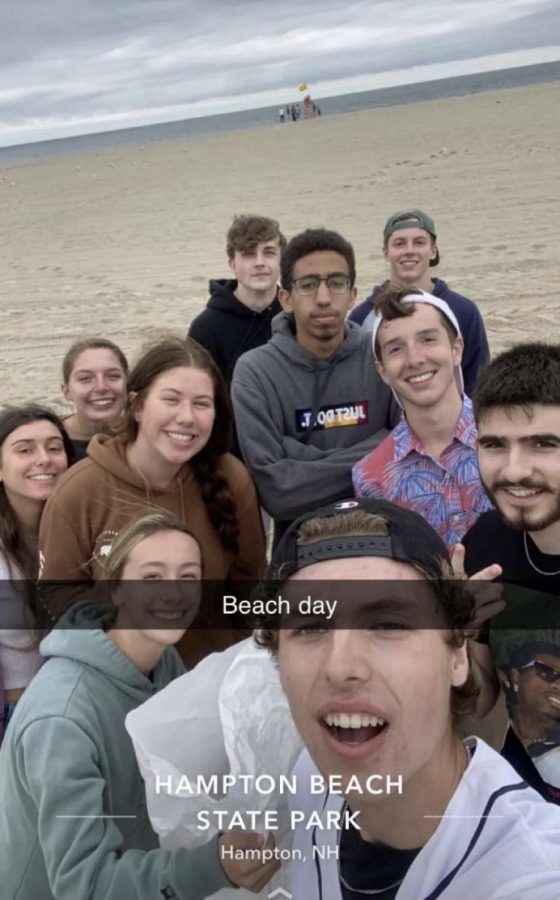 APES students stand on the beach after hours of picking up trash on the shoreline.

Below are the reflections the AP Environmental Science (APES) students wrote after their trip to Hampton Beach on Thursday September 16.  APES teacher Mr. Grant said they collected 22 pounds worth of debris, either washed up on shore or left behind by visitors.

My message would be to take the time to go out and clean up the beach that we all spend so much time at. I think that it is important to take a look at the impact that we have on the environment. This trip really put our impact on the environment into perspective for me. When I saw all of the trash that ends up on the sand and that will eventually get into the ocean it made me realize that even picking up half a pound of trash is still an important part of taking care of the environment.

My message would be that there are always things to do to solve the problems on the earth such as the problem of debris all over. I would add that it doesn’t matter if you were not the direct problem or threw that individual piece of trash on the beach. The reason being there are people that do not have a care for their environment, and although sad and unfortunate, we share that environment and have to pick up the slack for those not willing to clean up after themselves. The environment does not care who threw a certain piece of trash in the ocean, no matter who did it, the same negative result will be given to our world and the people living in it.

My message to the other students at LHS would be that my experience with the beach cleanup was a huge wakeup call. The amount of cigarettes and small plastic debris found was terrible. Just the five people in my group picked up 428 pieces of trash in all. Unfortunately there were many more pieces that we missed. We also in all reality only cleaned up a small portion of the beach at Hampton. If everyone in the school were to go to the beach and clean just imagine the amount of trash we could pick up. If students can’t go out their I would tell them to just be aware of the damage plastic is creating and how each person can do their part.

The amount of trash picked up by the 3% that participated was unbelievable for the small amount of time we had to clean the beach. However, the more people that can contribute to the cleanup, the cleaner the beaches and environment would be as a whole. The rest of the 97% is able to help by organizing their own cleanup day, or by simply making sure they do not leave any of their own trash behind.

After visiting the beach yesterday, it made me realize that our little laziness acts can really affect something people enjoy. As we pulled up to the beach, I walked on it and it looked really clean. I thought, “Why are we here it’s clean?” My group and I began to wander down our lane, searching for trash. I began to look closely and the sand was loaded with trash. Cigarettes, Tequila bottles, bottle caps, etc. were hidden on or beneath the sand. I spent more time bent over picking up the trash, than actually walking! At the end, Adam had tracked over 400 hundred cigarettes! A common thought to me was, “Why can’t people just throw them away?” I found an empty bottle of tequila buried in the sand, why can someone just not go throw it away? Looking back I think this 3% and 97% represents the actual issue we face today. 3% of the world does the right thing with trash and plastic as the other 97% does what they want. On the beach yesterday our students collected a whole lot of trash. I think we made an impact on making the beach cleaner, but imagine the effect with those other 97%! In the plastic issue, if everyone did their part we would not be on the beach cleaning, and we would see significant improvements. Going to the beach yesterday gave me the message I had always missed on the plastic/trash issue and I will do my share for now on.

The message that I would give to the other 97% of students in the school would be to make sure you dispose of your trash correctly which is so important. This is important because if you don’t dispose of it correctly you can end up dirtying the places that you hang out in, like for example the beach. Everyone knows that no one will want to go to a dirty beach, so in order to make sure that our beaches and hangouts areas are clean and neat, we need to dispose of our trash in the correct way.

I would say to the other 97% of students that going to the beach and cleaning up trash felt very rewarding, but also made me realize the magnitude of how much trash is put in the ocean. Just my group found over 400 items of trash in an hour, and we looked in a miniscule area compared to the rest of the world. It just shows the problem that we have and it felt good to help even a little bit.

Our ocean today is filled with plastics that are in there because us humans were either lazy or made a mistake when it came to dumping our waste. Walking along the beach yesterday and just seeing how much trash had washed up during a time when the beach isn’t as popular changed my thought on everything that comes to plastic in the oceans. Picking up trash yesterday at the beach not only was good for the environment but made you feel good that you are trying to create a change in today’s ecosystem. That was the best time I have had picking up trash no matter the location. It has really made me consider going to Hampton every once in a while  to pick up trash with my buddies just to contribute to making the world a better place.

In my group of five people picking up debris, we were able to pick up six pounds of trash in a select area over the course of an hour and a half. While the group efforts of the entire student group at Hampton were unable to clean the entire beach, we were able to make a significant dent in cleaning the beach. Even if one person took some time to pick up some trash on the beach, they would be making a huge contribution to the health of the beach and the marine life in the water. Also, smoking harms the person smoking and the planet, for the cigarette butts don’t biodegrade.

There is a lot of plastic in the ocean that is affecting the wildlife on land and in the sea. Picking up 500 things in my group in an hour made me realize how much trash people leave on the beaches. The only way we can fix this is to pick up our trash. I really liked the field trip picking up trash felt good to do. It could prevent animals from getting hurt and making the Earth more healthy.

Going on that beach and seeing how many little pieces of trash on the beach makes me concerned for the environment. If you go to the beach and have trash, be sure to take it back with you. If you don’t, most of that trash isn’t biodegradable and will be stuck on that beach forever. All of that can also end up going into the ocean. If you go to the beach and see trash, simply pick it up. It doesn’t matter how large or small that trash is, it is still impactful to the environment.

To the other 97% of students who did not participate in the field trip to Hampton beach Thursday, I would say that you don’t realize how much trash is on a beach until you really look. Yesterday I was expecting to see bottles, little six pack rings, straws, and genuinely big pieces of plastic all over the beach, but there were no noticeably big pieces of trash. Instead there were thousands of small little plastics and trash all over the beach. Every three steps there was a piece of a wrapper, cigarette, or bottle cap. The other 97% of our school needs to know that it is also the small pieces of trash that make an impact and our beaches are filled with them, even if it doesn’t look like they are at first glance.

To the other 97% of you students here at LHS, get out and do your part. Yesterday, my group and I walked around for only an hour and came out with over 400 pieces of trash and waste. It seems like a lot but that is only a microscopic fraction of the waste on our planet. We have barely scratched the surface of the trash that plagues our planet and it’s going to take all the help they can get to make a dent. Each piece of trash picked up is a major help to the health of our planet. We want somewhere for our kids to grow up and eventually raise their own kids, so we all need to do our part and make sure we don’t keep neglecting and hurting our planet. You may even fall in love with getting involved and helping. It gives you a great feeling of accomplishment, knowing that you are doing something meaningful and making a difference in the world. So I urge you to step out of your comfort zone and into your community and help wherever you can.

On the Marine Debris Trip yesterday, we saw first-hand the pollution problem on our beaches in NH. We picked up trash such as plastics (such as straws), metals, papers, and cigarettes for about an hour. Even though we didn’t nearly cover the whole beach, together, our groups collected hundreds of items of trash. This was very disappointing to see. This really opened my eyes to how much people affect the environment and how much plastics we are really putting into not only our oceans here in NH, but everywhere around the world.

Everybody should be concerned about the genuine environmental problems that pollution causes at our beaches, etc. Pollution isn’t always the big pieces of plastic we imagine them to be, rather small particles that are scattered around our ocean that refuse to decompose for many centuries. It’s a bigger problem we can imagine it to be, and nobody in our generation realizes the impact it has on our environment.

I would express the disappointment I had while cleaning up the beach. I figured going into it that I would pick up maybe 20 things. I had a sad realization about how bad the pollution problem is after my group picked up 300 items in less than an hour. Lots of cigarettes, cardboard, and even a tequila bottle were left behind. It opened my eyes to how polluted our beaches are.

If I were to give a message to the rest of the 97% of the school I would say get out into the community and help clean the environment. You don’t need to commit a ton of time but if everyone makes an effort, a lot of marine waste can be cleaned. The experience is very gratifying and enjoyable.