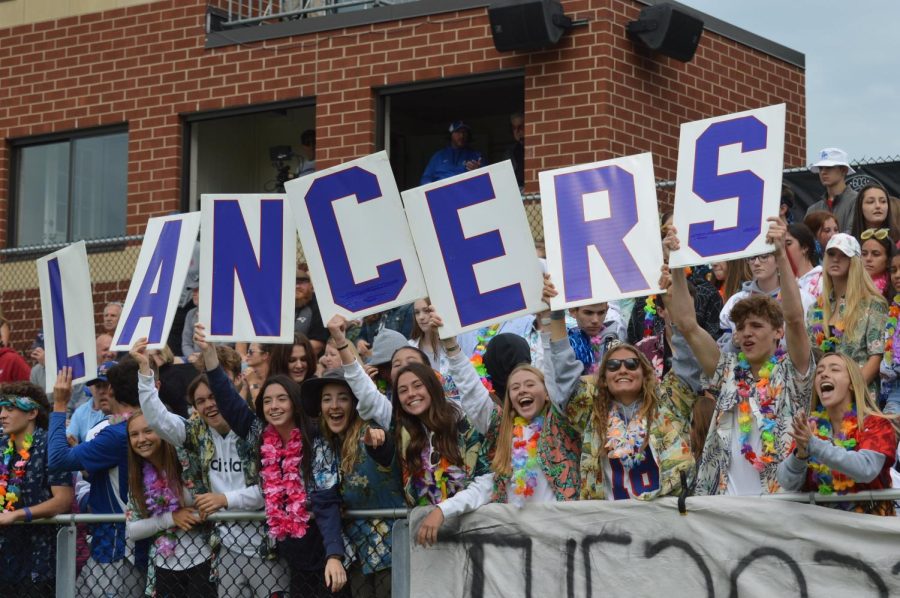 Gators hold up letters spelling out “LANCERS” during a home game against Alvirne. The letters have now become a staple at home games.

After a year-long hiatus, the Swamp has officially taken back their spot in the stands at Londonderry High School sports. This year’s 2022 Gators, led by Audrey Lidster, Olivia Windisch, Mike Williams, Brandon Savage, and Noah Malcolm, have brought back the much-needed school spirit to LHS, especially with Mack Plaque games coming soon.

Their adviser, Ms. Sullivan, has always been an advocate for the tailgaters since their conception over 15 years ago. It all started when a group of seniors were found barbequing in the high school’s parking lot, voicing their desire for the iconic college experience of tailgating. Sullivan was all for it.

“From that day on, we said we’ll organize this,” Sullivan said. “Let’s make this a thing at Londonderry High School. Since then, we’ve been tailgating before football games.”

For the 2020 fall season, no fans were allowed at the games due to the Covid-19 guidelines in place at the high school and across the state. Sullivan recounts standing by herself at the field’s fence, wishing for the revival of the famed tradition. During the home opener on September 10th, Sullivan said that the stadium felt “electric.”

“Everybody just felt that life was normal,” Sullivan said. “It’s just so nice to have the feeling of Friday Night Football back again.”

Senior Audrey Lidster has admired the famed section since her sophomore year, when she voiced her desire to help run the tailgates. Lidster acknowledged the draw the student section had, which led her to be at the front of it for her senior year.

“Just the school spirit Londonderry has honestly drove me to do it,” Lidster said. “The senior class in general was really excited about it. We needed somebody to step up and help plan the food and themes, so some of my friend group stepped up. It ended up being a really good result.”

The Gators are not only in charge of the planning process, but with the execution and clean up as well. The Gators bring and help cook the food for the pre-game and then clean up Lancer Park for game time. The seniors also clean up the stands after the game, which has gained them respect under the lights.

“I’m a big believer that our fan section after the game should be spotless, nobody else should be cleaning up after us,” Sullivan said. “When I went over there afterwards, there wasn’t one piece of garbage left there. They were amazing. Not only the board members, but some of their friends also stayed after to clean.”

The Gators have been a staple of the LHS football games for years, and many of those involved in the group now have watched since their freshman year. Senior Maura O’Shaughnessy has watched Lancer Nation come together under the lights since she entered high school, and has loved the experience of it.

“I was really looking forward to all the opportunities that are offered to the seniors,” O’Shaughnessy said. “After seeing the past two graduating classes stripped of their senior year, I was especially thankful to be able to be a part of something so special and exciting.”

With no student section allowed at football games last season, there was an air of excitement surrounding the return this year. Lidster felt the pressure to make the student section the best it could be not just for the seniors, but the rest of the student body as well.

“We want to set an example for the juniors and sophomores who want to be a part of the tailgate, especially since they’ve never really been up on the stands for football games,” Lidster said. “We also want to make it as great for the football players as well since they didn’t have the support last year.”

The effects of the student section are not lost on anyone. Sullivan recounts on watching the packed section at the first home game, all clad in their white shirts, cheering for their Lancers and notes that “it’s what we’re all about.”

“I just think it brings all the fun and energy back to fall seasons as it should,” Sullivan said. “Especially in a time where a lot of things have been taken away from [the students], this is one thing that hasn’t been lost.”

The reputation of the Gators spreads beyond the senior class, but to the other students and those upcoming to the high school. The title of “Gator” is a badge to wear with honor, and one O’Shaughnessy advocates for people to be a part of.

“Do it and make the most of it,” O’Shaughnessy said. “It is one of your last hoorahs as a senior and it truly brings your whole class together.”

While the Gators continue to support their Lancers for the remainder of the football season, they begin to look fondly at their time spent on the bleachers. Lidster supports anyone who wants to be involved their senior year to become a Gator.

“It’s some of the most fun you’ll have at the school,” Lidster said. “There’s nothing else truly like it.”