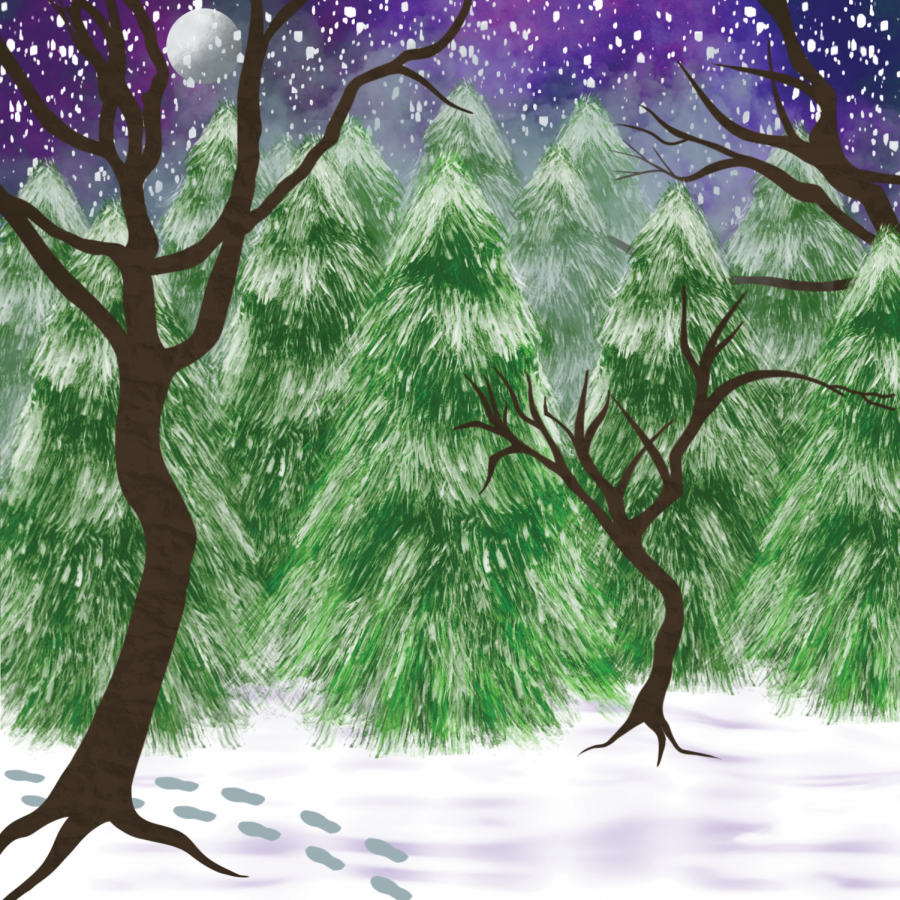 Congratulations to the winner and thank you to everyone who submitted!

“The Holiday Vandal struck again last night! Freddy told me in gym class he could see it from his window!” Ethan spat out half his food as he spoke, excitedly raving to my father, who sat next to him at the family dining table.

Dad reached into the middle, grabbing a napkin and shoving it in my little brother’s hands. The look on his face was not a happy one, rather a scowl. His cuts into his steak were a bit more forceful than usual. A long day at the station, maybe. “Yeah yeah, I hear enough about it at work.”

Ethan swallowed his peas before continuing, “Did you hear they’re planning on putting a big bounty on his head for whoever can catch him in the act?”

“It’s up to five thousand ‘cause of the blue tree,” Rhiannon chimed in next to me.

It didn’t start with the blue tree AKA the new bright feature in the least festive part of town. Down on Mays Avenue, where the firehouse turned into the community center right next to the center of town, where you usually would see a blank boring wall was now a beautiful mirage of blues in the shape of a standard Christmas tree. The painted lights weren’t able to shine, but they had just enough charm to make them pop right off the bricks as if they could. It was the brightest piece thus far The Holiday Vandal had painted, and it was the most risky. It all started with the gingerbread man painted on the side of Mayfield Middle School’s gym, then it was the menorah on the roof of the gazebo near the local synagogue. More and more little splashes of cheer popped up on buildings all across town. For the town where putting up Christmas lights was a reputation’s death sentence, the cheerful sight was ghastly, but I thought it was beautiful. ‘Course, it didn’t really matter what I thought.

I dug into my mother’s homemade Velveeta mac and cheese, watching the face of my father grow redder than the Santa hat painted on the corner of Freeway and Monumental.  “That little criminal is always gone before we get there.”

“The whole high school is rootin’ for him.” Rhiannon grinned, seemingly enjoying pushing Dad’s buttons. She pointed around with her fork. “He’s even got a TikTok in his dedication.”

A hand on her arm distracted her. “Now Rio, have some faith in your father and the rest of the precinct. He’s got a lot on his plate.” Actually, Mom, he’s only got mashed potatoes left on his plate. He angrily ate the rest of his food during his daughter’s insult to his integrity. Now, he was just grumpily fiddling with his tableware.

“My friends are too! The gym’s so bright now!” Ethan was right. That gross little building a walk away from the modern and newly built Junior High is now a pretty sight in the distance. It almost made me miss going there as a tween. Ethan was practically wagging an imaginary tail, he was so excited. “I can’t wait for what he draws next!”

Dad huffed, looking between his three kids and his wife at the other end of the table. He cleared his throat until my mother looked up at him, probably looking for her to change the subject. His head jutted in my direction. Her confused look was replaced with a nod and smile.

She cleared her throat. “So, Verona, how was your day?” The focus shifted onto me, which was a rare occurrence. My time was now.

I stared at my father, innocently smiling between my parents. “I realized I want to go into art.” His fork scratched against the plate. Bullseye.

“Won’t get you anywhere in life. Just look at the Holiday Vandal. He’s looking at time behind bars.” Now, I was used to making my father grumpy, but where his disdain started, my sister jumped in to feed the flame.

She dropped her spoon. “Oh, well he’s doing more for the town than you are, Dad. Look!” Her phone was directly pushed across my line of sight, right into his face. “His Instagram is blowing up right now! His new piece at the plant nursery, especially.”

Ethan stood abruptly, standing to see the phone, hand stuffed in his own mashed potatoes. “I wanna see!”

“See, he’s got thousands of followers.”

My chair pushed back from the table, loud enough to alert the sleeping dog in the corner, but not enough to warn my family. Rhiannon rushed to yell further at my dad, while Ethan was trying to grab her phone. My mother furiously attempted to wipe my spinning top of a brother’s hands off before he made a mess of the phone, and my dad’s bickering beard moved a mile a minute, hurling insults at my older sister. My dog sniffed my boots as I slipped them on, not wanting to ruin my fuzzy socks in the snow.

Rhiannon stormed away from the kitchen table, barely registering Ethan having her phone in his gooped-up, grubby fingers. My parents followed behind, their arguing blocking the sound of spray cans clinking together in my backpack. I had another late night ahead of me while Rhiannon’s grounding halted hers. I swung the backpack over my shoulder at the sound of Ethan opening a can of whipped cream for dessert.

I patted my dog on the head before I placed my hand on the cold handle of my front door. There was a second of hesitation when I heard my name being called by my father, but as my dog scurried off, I realized it wasn’t me who he had called for at all.

Rhiannon’s voice echoed throughout the house. “I’m glad he got away! He’s the only one making the town a better place to live.”

I smiled as I turned the handle of the front door. With my mask pulled up on my face and the jingle bell keychain on my backpack clinking away, I wandered down the snow-covered street to my next location. When the town woke up the next morning, it was assumed I never left the house.

I didn’t do anything.

The town’s infamous vandal, however, added a new piece to her collection.