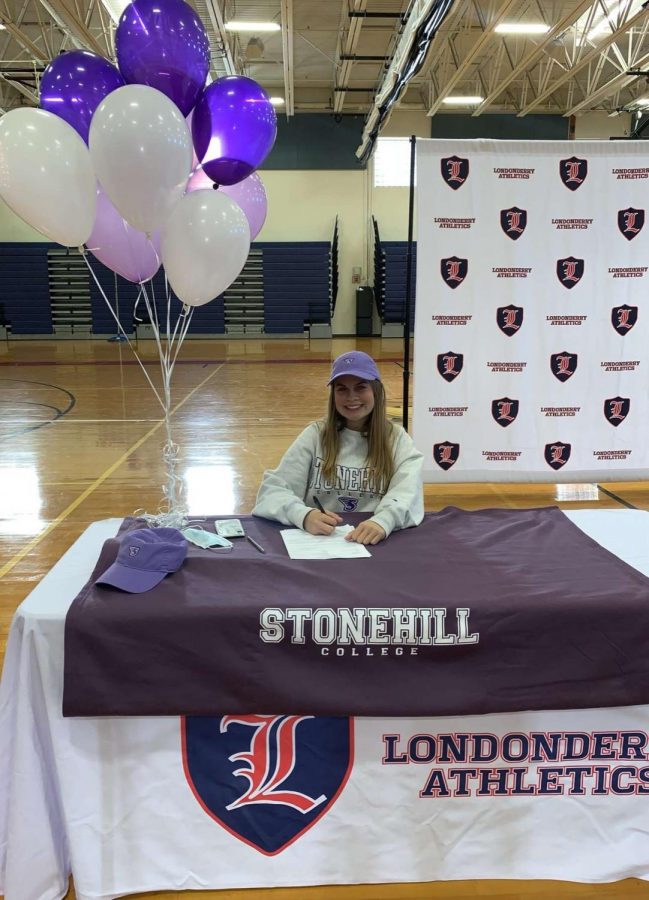 For as long as senior Caroline Leone could remember, her goal was to play lacrosse in college. She now plans on achieving that goal at Stonehill College in North Easton, Mass.

Last December, Leone announced her verbal commitment to Stonehill and was the first in her class to commit to college.

“It was definitely the proudest moment of my life,” Leone said.

Lacrosse has been a huge part of Leone’s life ever since the second grade. From constant practices to intense games, her career wouldn’t have existed if it wasn’t for her father.

“My dad always wanted me to give lacrosse a try,” Leone said. “I am so glad that I listened to him because it’s one of the best decisions I’ve ever made.”

Along with her dad, Leone has had many role models that have helped her throughout her lacrosse career, one of them being her teammate from her club team the Tomahawks, Bishop Guertin senior Rylee Bouvier.

“Both of us have been on the same team for years, and she constantly hypes everyone up and pushes me to be a better player,” Leone said. “I’m really glad that I’ve had people by my side every step of the way.”

Leone is also considered a role model herself. Her younger sister, sophomore Ashleigh Leone, also plays lacrosse and has similar aspirations as Caroline. Caroline Leone has worked to fulfill herself as a role model for her siblings.

“Caroline inspires me because she always puts her team first and brings energy into everything she does,” Ashleigh Leone said. “She encourages me on and off the field and has made me a better player and person.”

Through constant support, Leone was able to start her recruiting process with ease. Friends and family gave her recommendations on what schools to consider. Many college coaches even reached out to Leone, but she didn’t “feel a connection with any of them.”

“Then the Stonehill coach reached out to me, and we instantly clicked,” Leone said. “I felt super comfortable with the coach right from the beginning.”

Before committing to Stonehill, Leone went back and forth with the coach and considered her options. After doing that, she knew this college was right for her.

“It was such an exciting experience to finally decide where I was going to spend the next four years of my life playing the sport I love,” Leone said.

Leone announced her news on social media. She received many words of encouragement from friends and family.

“I got so many congratulations from people, some I didn’t even know,” Leone said. “My friends and family all said how proud they were of me and how I deserved every bit of it.”

Leone officially signed to Stonehill on Nov. 16, 2021. She had her closest family and friends there for this moment. The signing has officially started her journey on becoming a college lacrosse player.

“It was such an exciting experience and having everyone there made it more special,” Leone said. “It felt like my dream was finally becoming a reality.”