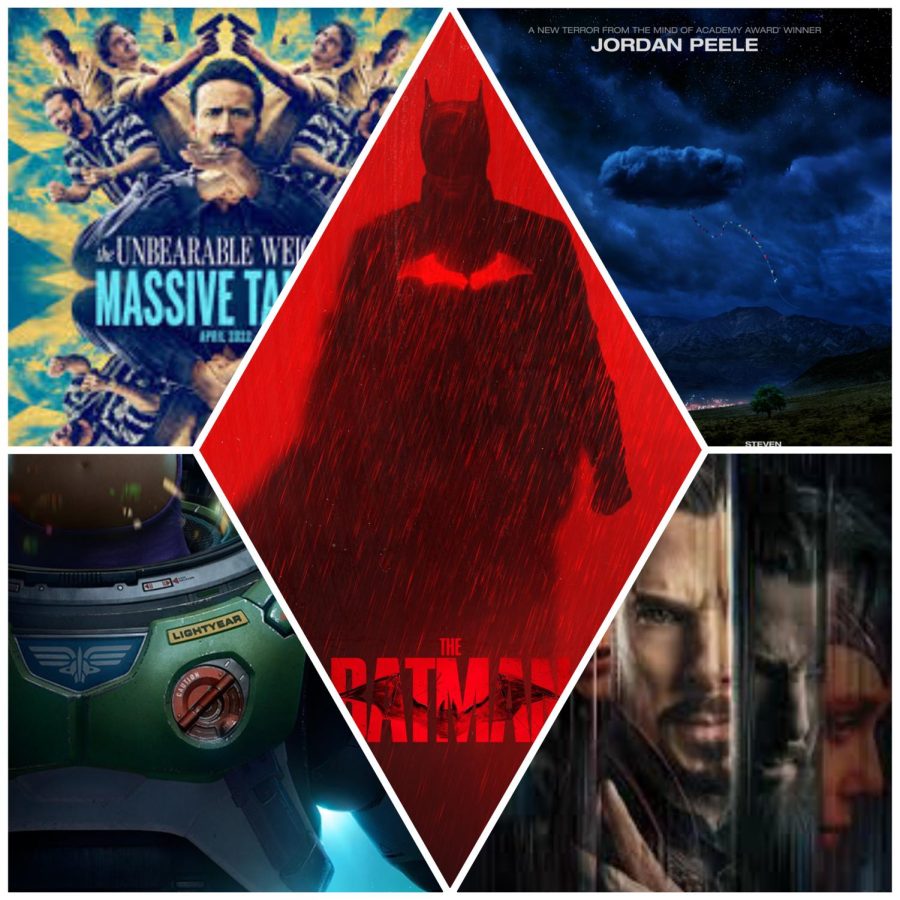 All posters from IMDB

The 2022 films use a more simplistic look for their trailers, which make them even more appealing to audiences.

If 2022 has the potential to be remembered as something, it could very well be known as the year of movies. Coming off of the low-count blockbuster filled year that was 2021, all eyes look to the new movies that are slated for release this year. Many of these releases have been anticipated for a couple years after being pushed back via the pandemic – making the excitement for them reach a whole new level.

After decades of mediocre Batman installments (and a very successful trilogy), the idea of a new Batman origin story was not well received. This, however, was before the studio dropped a smashing trailer that showcased Robert Pattinson’s unbelievable acting. With a score to shake theaters and the return of the dark and gritty version of the vigilante, March belongs to The Batman.

The Unbearable Weight of a Massive Talent (release date: April 22, 2022)

Deemed “the most Nic Cage movie ever”, The Unbearable Weight of a Massive Talent stars Nic Cage as himself, as he travels to Spain to attend his biggest fan’s (Pedro Pascal) birthday party. When things take a turn for the worst, Cage is forced to live in some of his most iconic roles to save the ones he loves from a notorious, yet unnamed, drug lord. This action comedy, accompanied by it’s studded cast, is a guaranteed laugh this April.

Doctor Strange in the Multiverse of Madness (release date: May 6, 2022)

Coming off of the success of Spider-Man: No Way Home, this next Marvel film is growing in terms of excitement and anticipation. Multiverse of Madness intends to be the bridge between multiple different Marvel projects, and teases the returns of fan favorite characters. Considered to be the most anticipated film of 2022, Marvel intends to recreate their movie magic.

If there’s one thing Disney gets right, it’s their Pixar movies. Although the title may be misleading, this film will not be following the famous character its title shares a name with. Instead, Pixar has created an origin story of the fictional man the toy is based off of. With Chris Evans voicing Lightyear and a cinematic trailer to pair with it, Pixar’s next film is a near-guaranteed hit.

Much like many films on this list, there seems to be little to know about the action film Bullet Train, but what it lacks in knowledge it makes up for in cast. Set on a Japanese bullet train, five assassins learn that each of their respective missions are intertwined with one another. With Sandra Bullock and Brad Pitt as the big-wigs of the film, they are only a glimpse into the trusted cast that’s set to appear in the movie. Directed by David Leitch (Deadpool 2, Atomic Blonde, John Wick), this film has the potential to revive the dying action movie scene.

Director Jordan Peele is the future of horror, and there is no denying it. His directorial debut Get Out was an instant hit, making it in the top 30 grossing films of 2017. Peele created magic again when he released Us in 2019, which is one of the top rated modern horror films. Although there is no known knowledge of the movie’s plot (aside from a studded cast), Nope can already be a guaranteed horror hit.

As 1950s housewife Alice (Florence Pugh) attempts to do her diligence, she begins to question her husband Jack’s (Harry Styles) work company. This physiological thriller is packed with a studded cast, with the likes of Gemma Chan and Chris Pine slated to appear. Although the teaser trailer doesn’t give much insight into the true happenings of the film, the suspense is already drumming up hype for its release.

The first installment of Spider-Man: Into the Spiderverse smashed the box office bringing in $375 million, propelling it into the top 100 highest grossing animated films list. All that is known about the film at this time is that it will go further into the Spiderverse, bringing in more beloved characters from the iconic Spider-Man comics. With a killer animation style and star-powered voice actors, there is no doubt that the sequel is to be just as powerful as the first.

A sequel over 12 years in the making, Avatar 2 is tasked with the challenge to perform just as well as one of the highest grossing films of all time (Avatar held the record for nine years before being tied by a re-release of Avengers: Endgame). While Jake Sully (Sam Worthington) and Ney’tiri (Zoe Saldana) return to the big screen, this sequel will explore the different regions of Pandora, all while the future of the planet is threatened by an ancient being.

Based on the novel of the same name by David Grann, Killers of the Flower Moon follows an investigation on the murders of the wealthy and native Osage people in Oklahoma during the 1920s. With Martin Scorsese leading the charge as the film’s director, he brings two of his most trusted actors to star in the film: Leonardo DiCaprio and Robert De Niro. Although not much else is known about the film, having these three powerhouses on set guarantee a blockbuster hit.