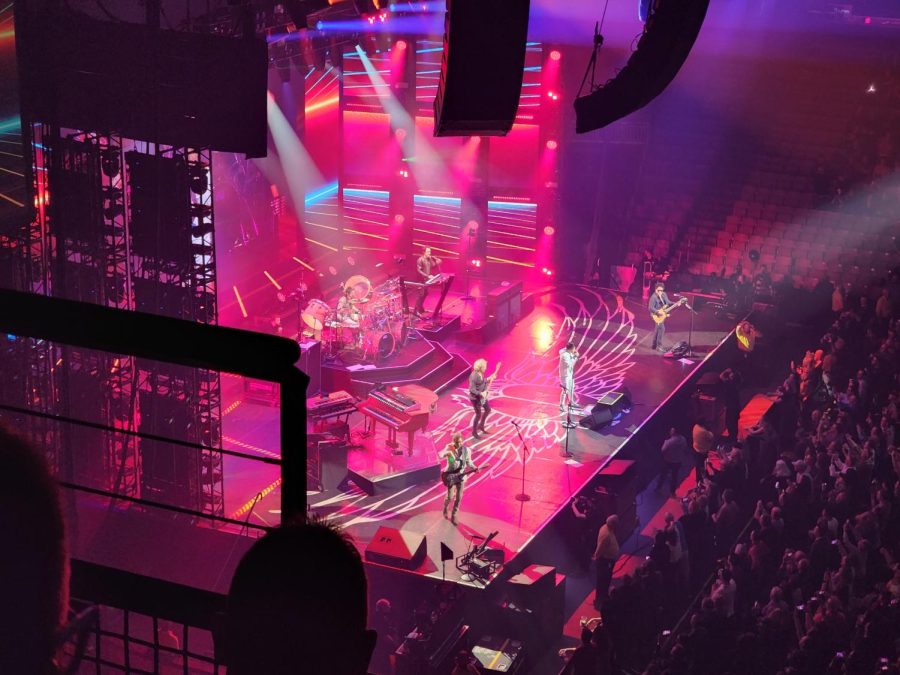 Journey opens with "Only the Young" off of the 1983 album Frontiers.

In early February, the Southern New Hampshire University (SNHU) Arena posted on their Facebook page that a new show announcement was on the way. I sighed, thinking of yet another boring, obnoxious band. A few days later, it was announced that the legendary rock band, Journey, would be taking their 2022 Freedom Tour to the area on March 6 with a very special guest: Toto. A once in a lifetime opportunity, I thought. I immediately texted my dad, knowing he’d want to go as he grew up listening to this band.

After getting the tickets, I was so antsy. The anticipation was getting to me. I never thought I would get to experience concerts again after 2020, but even more than that, after seeing multiple bands since, never did I think I would get to see one of the greatest bands of all time just next door in Manchester.

The day of the concert was chaotic: starting with a winter percussion competition in Dover that afternoon. We ended up with 1st place, which helped set the mood for the rest of the day. When I got home, I quickly changed, but grew impatient as we waited for my dad’s boss, Brian, to arrive at the house.

Once Brian got to the house, we immediately took to the road. We wanted to arrive early to find our seats and settle in. I found the seats as my dad and Brian went on their own journey to make some quick stops before the show.

Toto took the stage a little past 7:30 and man, what a show. The band brought all they had to share with us, and they did not disappoint. Opening with “Orphan,” the lights went on and I immediately felt the coveted “concert high”, a feeling you only get at live shows. Lead singer Joseph Williams (son of the legendary composer John Williams) was full of charisma as he went from one side of the stage to another, playing air guitar as he had breaks within the songs.

They continued on with songs like the nursery rhyme spinoff “Georgy Porgy” and penultimately played the iconic drum song, “Rosanna.” Guitarist Steve Lukather particularly impressed me, appearing in over 1500 albums. Boz Scaggs, Elton John, Earth Wind & Fire, and most notably, playing guitar for a majority of Michael Jacksons’ album Thriller.

The band ended with their greatest hit, one of the most recognizable songs of all time, “Africa.” The whole crowd sang along at the top of our lungs, as we all blessed the rains down in Africa. Ending with a call and response from Williams, we were pumped up and ready for the rest of the night.

The roadies then took to the stage and prepared for Journey. Jonathan Cain’s red piano was brought up, while setlists were placed on each side and by each instrument. In the meantime, a playlist of eclectic songs played. I remember hearing Billy Idol’s “Mony Mony” (Idol was supposed to be the opener for the tour but had to cancel after receiving surgery for a chronic sinus infection). Half an hour later, out of nowhere, Led Zeppelin’s “D’yer Mak’er” briefly rang throughout the arena, then the lights dimmed and the band took the stage. The crowd erupted in applause as each member took their place.

Journey began with an electrifying performance of “Only the Young” after an instrumental intro. Fans of all ages were singing along, waving their arms, closing their eyes and living the dream. Everyone from the teenaged couple a few rows above us, to the older folks to my right were swaying back and forth, taking in everything.

Guitarist Neal Schon caught the attention of all in attendance, giving us an amazing solo before “Stone in Love,” which has quickly grown to become my favorite song.

After the song with a quick pause, keyboardist Jonathan Cain struck the piano and began playing a Journey staple: “Don’t stop Believin’”.

A group of intoxicated guys behind us took to the front of our section and all started dancing and singing as lead singer Arnel Pineda belted out the chorus: they quickly took back to their seats when a woman became frustrated, gave them a shove, and told them to get back.

Following the song, Cain grabbed a stool and began speaking to the fans as he played an awe inspiring piano instrumental.

“Thank you for sharing your Sunday with us, especially on such short notice, we really appreciate that,” Cain said. “They say behind every song there’s a story. I started this next one on a late night bus ride, in 1982, it was a long tour that year, and all of us, we all missed our loved ones and paid a price for the road life we lived…these days I got to thinking about some folks who paid the price for life they live- the men and women in our armed forces who sacrifice so much for our freedom.”

The crowd clapped in support with a feeling of unity within all.

“So tonight, let’s send this song to them,” Cain said as he played the opening line to “Faithfully”.

Arnel Pineda showed emotion as he sang the power ballad, reminiscing the works of former frontman Steve Perry. Hands waved through the air and phone lights shined in the air. The group performed through their greatest hits, also featuring lead vocals from accompanying keyboardist Jason Derlatka on “Suzanne” and drummer Deen Castronovo on “Mother, Father”.

The finale began with “Be Good to Yourself”, accenting Cain’s punchy keyboard riffs and Schon’s simple, yet intricate lines.

“Woah, woah, yeah, Be good to yourself, Manchester!!!” Pineda sang as the band transitioned into “Any Way you Want It”

As the last words of the hit song were sung, confetti flew from the ceiling, pouring onto the crowd and stage. A heartfelt moment was felt as the band stepped forward from their instruments to the front to say goodbye.

Pineda introduced the band, then after a quick dance move, handed the mic to Cain.

“Aaannnddd, for the last 15 years, our lead singer, the thriller from Manilla, Arnel Pineda!” Cain said as Pineda bowed to the audience.

“Thank you New Hampshire, have a good night, we love you, please bring us back, c’mon!

Leaving the arena, I was dumbfounded. Both of my ears were ringing and I felt the post-concert euphoria. I was blown away by the talent of both bands. Aside from talent, my father introduced me to this music at a very young age and I felt incredibly lucky to be able to experience the music that defined the 1980s and will stand the test of time.

To the guys with Toto, Neal, Jonathan, Arnel, Deen, Jason, Todd: New Hampshire loves you and we welcome you back with open arms. Until next time.

Below are photos from the concert.