The controversy behind Roe v. Wade 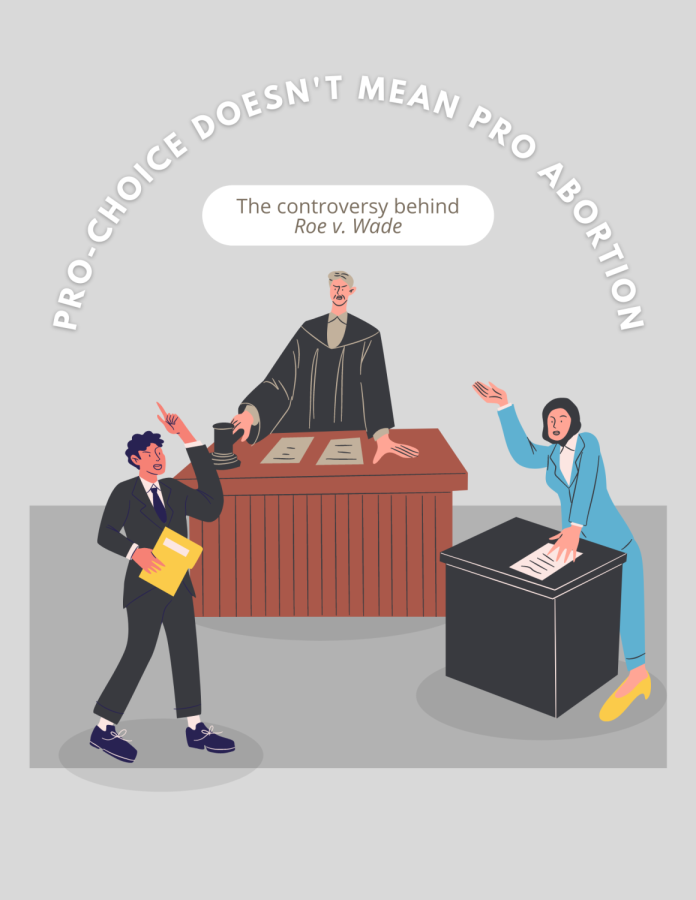 There are a myriad of arguments surrounding the debate about abortion

Following a leaked Supreme Court draft that was released on May 2, there is now valid speculation that Roe v. Wade will be overturned. Roe v. Wade is commonly connected to the right to abortion, however what may not be known is it is more about insuring the right to privacy for individuals.

Established in the Due Process Clause in the Fourteenth Amendment, the “right to privacy” is fundamental and protects a woman’s right to make decisions about her own body. After the first trimester of a pregnancy, the state is allowed to impose regulations for abortion, but any state right that vaguely prohibits abortion without any regard to the condition or stage of pregnancy goes against a woman’s right to privacy.

So, what could happen if Roe v. Wade is overturned?

If Roe v. Wade is overturned, that does not mean abortion is automatically illegal across the nation. The reversal of this case would then leave it up to the states to determine if abortion will be legal in their territory. If abortion does become illegal, that doesn’t mean abortions will stop, only safe, medically regulated abortions will. Women who are put in a position to birth a baby they are not emotionally, physically, or financially able to take care of may seek out a more dangerous route to terminate the pregnancy.

Roe v. Wade has been cited in many other Supreme Court cases over the years, as they fall under the right to privacy. If Roe v. Wade is overturned, this could put these other cases at risk for being overturned as well. Examples of such cases include Obergefell v. Hodges which legalized gay marriage and Loving v. Virginia which legalized interracial marriage in 1967. This is not saying that these cases will also be overturned by the Supreme Court, but states may take this event as an excuse to reevaluate other cases that cited the right to privacy.

This could lead to the possibility that women who are looking to terminate their pregnancy, or even suffer an accidental miscarriage, may face criminal charges. If abortion will still be legal in some states, a woman could be charged with a felony if she travels across state lines to receive an abortion.

Some common arguments surrounding a woman’s right to choose

Abortion has always been a big area for debate in politics, on social media, and in conversations with friends and family. These arguments stem from people siding with pro-choice (standing with the right to an abortion), and people siding pro-life (standing against abortion).  There are a few major arguments made from the pro life side of the issue.

Now of course, religious reasons against abortion are good reasons to not want abortions for yourself. To impose your religion onto others around you is not fair, and having the government execute a religious vendetta goes against the separation of church and state, a foundational policy in our nation. Separation of church and state is implied in the Establishment Clause of the 14th Amendment; while it does not say that individuals cannot bring religion into politics, it says that the federal government cannot advance or inhibit religion. If the overturning of Roe v. Wade is in any way linked to religious reasons, that would go directly against the Establishment Clause, as the government would be advancing a religion.

Another popular pro-life argument is that terminating a pregnancy is murder, as it is ending a potential life. Now, of course a fetus is more than just a clump of cells, but the female is needed in order for life to survive. The fetus is a part of the woman’s body, which should give her the right to do with it as she pleases. A fetus is not usually considered viable before 22-24 weeks into the pregnancy. Sure, it is possible for the fetus to survive outside of the womb before that time, but it is not a common occurrence, less than 50%. Before 24 weeks, the lungs and other vital organs are not developed enough to survive without the mother.

Abortion laws right now typically allow for abortions up to the time of viability, which seems like enough of a compromise. By that time, the woman has enough time to not only find out she is pregnant, but make an educated and conscious decision to terminate the pregnancy or not. A more recent law in Texas bans abortion after six weeks into the pregnancy, which may not even give a woman enough time to find out she is pregnant, let alone decide what to do with the fetus.

Yes, there are other options outside of abortion, but those are not always reasonable for the pregnant woman. Most reasoning behind abortions come from the woman not being financially, emotionally, or physically ready to give birth. The physical trauma that a woman’s body goes through during pregnancy needs to be taken seriously, and it is not something that every woman wants to or should have to go through.

Adoption may seem like a viable option to most people, and that’s great, go for it. But for others, giving up a child for adoption can be emotionally scarring for many reasons, including knowing that your child is out there somewhere. And, once old enough, that child may go and seek out their birth parents, and could harm both the parent and child even more. If someone is not ready to be a mother, in any capacity, she should not be forced to become one.

Additionally, putting a child up for adoption or in the foster care system may also lead to a poor life, maybe even worse than if the child stayed with their birth parents. According to the Administration for Children and Families, there were about 400,000 children in the foster care system in the United States at the end of 2021. If pro-life members of the community are such advocates for this system, why don’t you adopt those children that you “saved” by banning abortion?

Those who claim they are pro-life only seem to really be pro-birth. Many republicans do not support welfare assistance programs like the Special Supplemental Nutrition for Women, Infants and Children, or WIC. In 2018, Trump proposed a $200 million cut from the WIC budget, and many House republicans supported that proposal.

In Planned Parenthood v. Danforth, the Supreme Court ruled that spousal consent is not required to terminate a pregnancy, and if the two partners disagree about what should be done, the woman’s decision would prevail, due to the fact that she is the one carrying the fetus. Additionally, in Planned Parenthood v. Casey, the Court ruled that the father is not required to even be notified before the woman receives an abortion, as it may place an “undue burden” on the woman, especially in an abusive relationship if she fears her safety or the safety of the unborn child.

Because the woman is the one who is responsible for carrying the fetus to term, and her body would be the one receiving any potential trauma, it should be left up to her to terminate or not. However, if the father does not want anything to do with the child once it is born, he should be able to receive what is called a “financial abortion”. This type of “abortion” is when the father can opt out of any financial responsibility of the child, if he would prefer to remain childless.

But, if he does not want the mother to terminate the pregnancy, he should not necessarily get a say, again due to the fact that it is the woman’s body. If he wanted to be a single parent so badly, he can find a voluntary surrogate mother or adopt a child. He should not have the right to force a woman to go through an unwanted pregnancy.

People seem to be missing the point of the pro-choice side of the debate. It is not pro-abortion, these supports simply want women to be able to have the choice to get an abortion if needed. Hence the “choice” part of pro-choice.

It should be up to the woman to choose what to do with her own body, no matter the circumstances, up to the typical viability time frame of the fetus. We should not be allowing Congress to put laws on a woman’s body.

If you don’t support abortion or don’t want one, then just don’t get one. It should be your choice.