Junior Sophia Miller’s journey towards discovering her passion for design 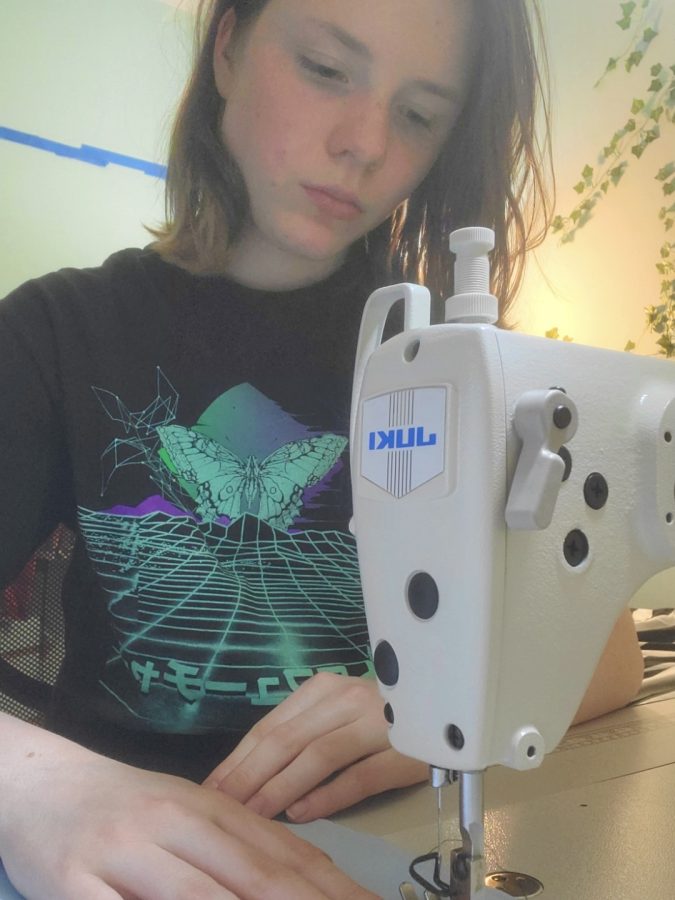 Miller gains a sense of achievement when doing what she loves, and said that she spends “hours upon hours a week” at the sewing machine.

Discovering something your passionate about is often a more demanding process than it appears in books and movies. Unlike what’s displayed in these sources of entertainment, this process can take years, and requires plenty of patience and dedication. Junior Sophia Miller faced this actuality whilst committing to a lengthy process of “self reflection,” and this way, she was able to discover her sincere passion for design.

Before starting her designing journey, Miller was set on a completely different path, putting an intense focus on science and mathematics. But after the eventual realization that she “wasn’t happy” focusing on arenas she didn’t feel genuinely about, Miller eventually steeled herself and “switched courses in life.”

“I thought I was destined for a stem career,” Miller said. “Now I want to be a fashion designer. All I know is I’ve been much happier and productive doing what I love.”

Miller started her designing journey not far from the start of the pandemic, with a $80 sewing machine she bought off of Amazon. However, this instrument became inoperable within a month. The frustration that stemmed from this could’ve led to the end of her sewing career entirely, had it not been for the kindness of a neighbor.

“A neighbor let me use one of her machines, which basically saved me from completely dropping sewing,” Miller said. “Eventually I began to experiment more and more to the point I’m at today.”

Miller has stuck with sewing and designing through her “multitudes of failures.” In fact, she said that during the start of her career, for quite some time, the clothing she sewed/designed was less than ideal.

“The first two years I would make clothing I never wore,” Miller said. “I have a bin of failed attempts or first attempts at garments I refuse to toss out for sentimentality or repurposing.”

However, because of these two years filled with challenges, Miller was able to learn patience, and eventually, her multitudes of failures would lead to what she views as her greatest success.

“All this led to me currently being able to make clothes for myself and others,” Miller said.  “My biggest success would probably be being featured on Depop’s features page for one of my garments.”

Depop is a clothing site created for the selling of homemade, or secondhand clothing. Miller has her own    Blog and Depop Shop; here, she shares her designing journey, and focuses on creating and selling unisex apparel. The clothing sizes available for her creations range from an XS to XL.

Though her store is fairly new, and still rather small, Miller aims to continue to “expand upon [her] presence” by exhibiting her work on social media. Even so, the process of growth has proved to be difficult to manage.

However difficult starting a business has been, the support of friends has helped Miller remain positive. Senior Cassidy Methot met Miller through their participation in Heal the World club, and she first recognized Miller’s craftsmanship when the club participated in a school wide event.

“She donated some of her creations to Heal the World’s table at the craft fair,” Methot said. “She made some jewelry and hair accessories, and even though they were handmade, they looked very professional, like something you would buy in a store.”

Along with seeing her designs in the craft fair, Methot also wore a pair of earrings Miller made, and said that it “went [with her outfit] perfectly.”

“You can tell she loves what she’s doing and she works really hard on anything she designs,” Methot said.

Methot said that she appreciates Miller’s overall “creative mindset” in her designs; like when Miller managed to turn a pair of jeans into a purse.

“I think her style is very original, which I think really makes her stand out,” Methot said. “I think she applies this originality in her fashion designing.”

Miller has shared her “excitement” with Methot whenever she finds different fabrics and materials she can use for her creations. Methot said that she can tell that Miller is “very passionate” about her designs.

Junior Sara Abdel-Fattah, who has known Miller since middle school, has seen Miller’s journey in design first hand over the years.

“Her designs are really cool,” Abdel-Fattah said. “She works really hard on them. She would make a bunch of scrunchies and jewelry for me in the past, and I would be very open to buying from her.”

Although her passion for sewing is unwavering, Miller does occasionally struggle with days where she’s preoccupied, and unable to put much focus on her work. But in the end, she always finds herself gravitating towards the sewing machine one way or another.

“It’s funny because after a day or two of not making anything, I sort of go through sewing withdrawal,” Miller said. “It’s the fact that I can make literally anything. There’s more to fabric than meets the eye.”