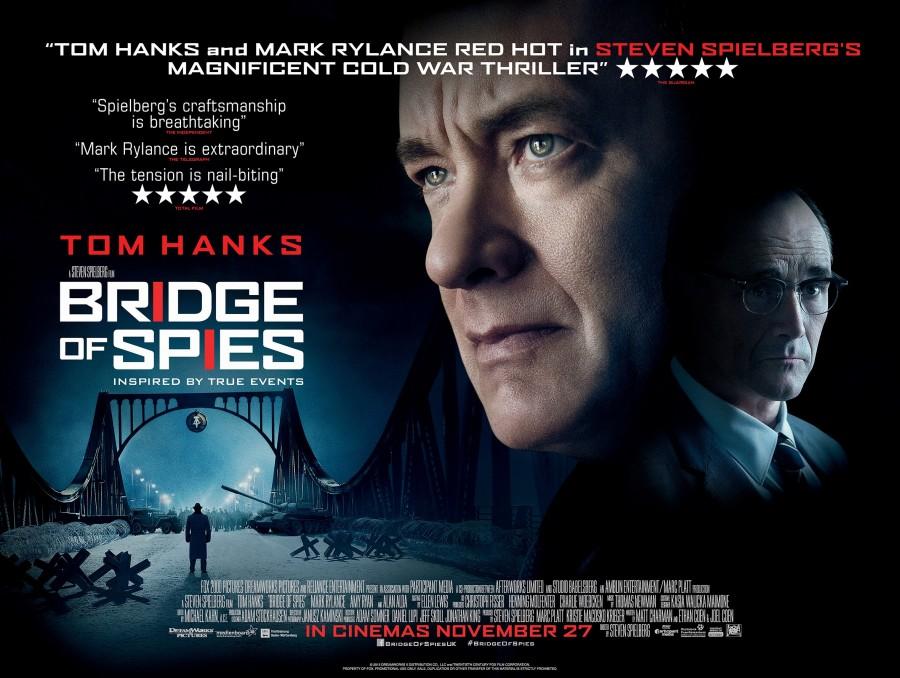 Fair use image from Dreamworks Pictures

Graced by a Coen Brothers’ script and Steven Spielberg’s direction, Bridge of Spies is an engrossing piece of Oscar-bait cinema. In his fourth collaboration with two-time Oscar winning actor Tom Hanks, Spielberg paints a visually and emotionally captivating portrait of the Cold War.

When American lawyer James B. Donovan (Hanks) is tasked with defending a presumed Soviet spy, his unparalleled nobility earns him another equally controversial job. Required to travel to Germany, Donovan must negotiate the exchange of his Soviet client for an American soldier being held captive by the Soviet Union. In a race against time and intelligence, Donovan battles with Soviet leaders through the dealings.

Bridge of Spies, in many ways, has the feel of an old movie. Being shot on 35mm film and using many cinematographic techniques from the Golden Age of Hollywood, the conversations are directed with smooth long shoots of varying angles. With a mastermind director like Spielberg behind the camera, the flow of the film is at a nearly perfect pace. For a movie made up almost entirely of dialogue it can be surprisingly moving and even suspenseful.

Writer/directors Joel and Ethan Coen, of No Country for Old Men fame, team up with newcomer Matt Charman to craft a surprisingly humorous screenplay. Bridge of Spies is filled with witty dialogue; the Coen brother’s dark, yet good natured sense of humor is a terrific attribute of the film, which is buoyed by the laughs delivered.

Along with the film’s charming humor, the conversations between characters create quite emotionally affecting moments. It is primarily in the dialogue between Hanks and English stage actor Mark Rylance (who plays Rudolf Abel, the presumed Soviet spy) that the script shines. Hanks and especially Rylance deliver two powerful and Oscar-worthy performances, as they chew threw the legalities and moral questions of Abel’s case.

In Spies, Hanks and Rylance give touching performances as two men who defy their enemy status to find friendship. Hanks’ character, a family man, is ultimately the portrayal of the near-perfect man. Having similar nobility to Atticus Finch, of To Kill a Mockingbird, James B. Donovan fights against all odds and scrutiny to do right by his country. Rylance gives the performance of a patriot and a man in full understanding of his fate. Evoking both sympathy and pity, Rylance creates a truly lovable character who will be remembered through cinematic history.

While many dialogue-driven movies may not be the most rewatchable, Bridge of Spies’ humor, tension, and admirable characters make it a film to treasure. It is a film of dark themes and some grim scenes that showcases Spielberg’s ability to create a fairly lighthearted atmosphere in the midst of difficult subject matter. The key of the movie, its pacing, gives the film a vibrant energy that makes its nearly two and a half hour run-time move by swiftly.

Bridge of Spies may come across as a boring “talking movie” to many movie goers, but it is far from that. Steven Spielberg’s 28th film is an elegantly crafted piece of historical filmmaking. A movie of deeply thoughtful ideas, wonderful conversations and remarkable performances from Hanks and Rylance make Spies a continuation of Spielberg’s success and a probable Oscar contender.