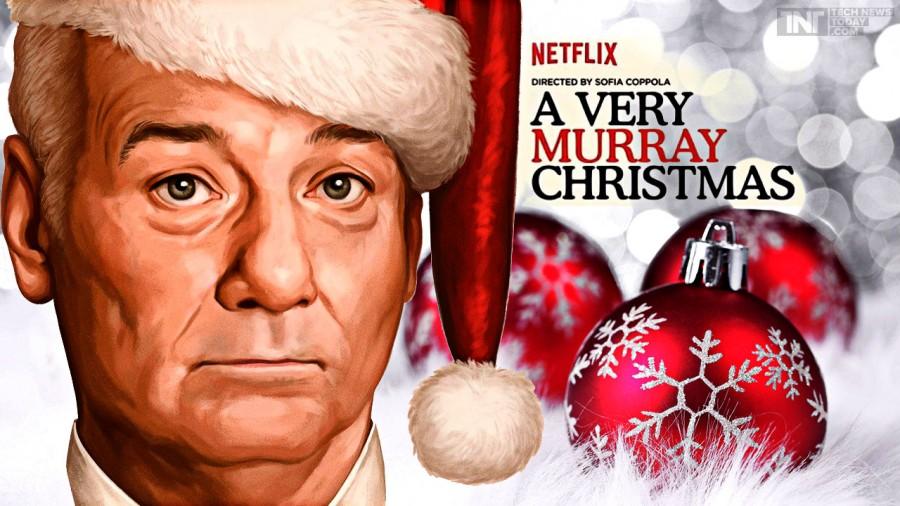 Fair use image from Netflix

Teaming up for a second time, Bill Murray and Sofia Coppola grace us with the horribly disastrous Netflix holiday special A Very Murray Christmas. What does fifty six minutes of aging Murray bellowing into a microphone prove? The once comedy legend’s acting career is coming to an overdue close.

Playing himself, Murray decides to broadcast a Christmas special featuring an array of songs. When all goes wrong Murray’s telecast of singing turns to an incoherent and bizarre tale of various characters lounging hopelessly in a hotel bar.

With almost non stop music, Murray Christmas is filled with lousily sung classic Christmas songs and original tunes with shockingly unclever lyrics. Despite having musical guests like Paul Shaffer and the entire band Phoenix making appearances, the music hear is indisputably painful to sit through.

Ironically, the only feasible part of the short comes from a scantily clad Miley Cyrus singing Silent Night as if it were her siren song. Her undeniably beautiful voice, which is often hidden behind her pop norm, briefly takes you away from the abomination that this Christmas “special” is.

Looking beyond Cyrus’s surprisingly impressive cameo, the special’s music is packed full with strange and uncomfortable moments. From George Clooney popping out from behind trees to sing along to Jason Schwartzman’s annoyingly squeaky singing voice, the humor in the music feels unbearably forced.

While it is a musical disaster, its tone is also entirely confusing. Murray plays a lonely and depressed version of himself, but as the special carries on it progressively feels less like an act. Murray (and frankly most of the actors) appear confused to why they are there. While that is partially part of the story’s shtick, there is something genuine about it.

During one scene of endless singing, Murray stops to take two anguished shots of tequila. The moment feels incredibly unscripted as if he is drinking to forget his current agony. The majority of the actors seem to be in a drunken stupor as they stumble through their performances.

A Very Murray Christmas should be a true embarrassment for Coppola, Murray, Netflix and anyone else involved. Even on a technical level, with its sound mixing and cinematography, the special is very amateur. On par with the notorious Star Wars Holiday Special,  it is absurdly unwatchable.

The only positive thing that can be said is that it is so caustically horrible that it may just live on through its stupidity. For fans of the “so bad it’s good” genre, this cringe inducing journey might just be worth checking out.