‘The Hateful Eight’ Tarantino’s most over-the-top 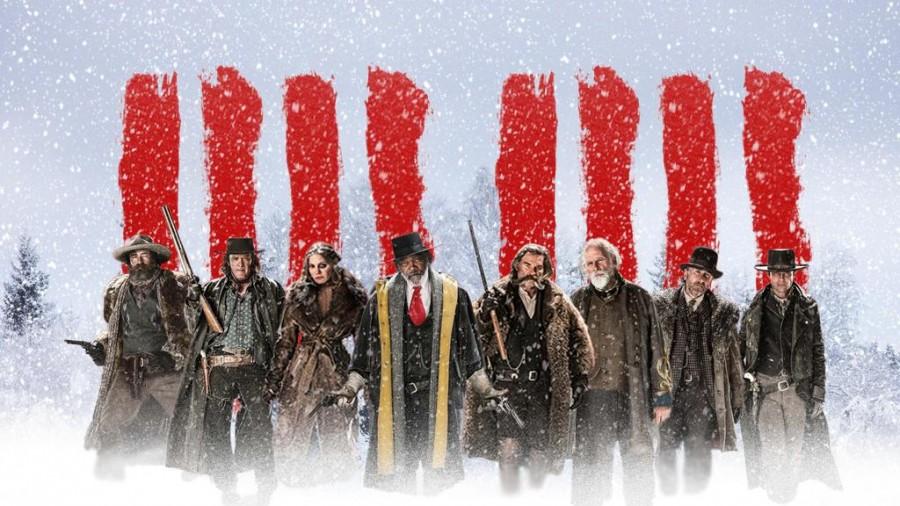 Fair use image from the Weinstein Company

Quentin Tarantino’s eighth film, The Hateful Eight, is a savage, dark and gruesome tale that never fails to be fantastically exciting.

As much as the movie is another cinematic achievement from the notorious director, it is also an important moment in film history. Since the digital revolution in Hollywood and the near extinction of shooting movies on film many directors (including Tarantino) have band together to keep the industry alive. With The Hateful Eight, and for the first time in over fifty years, this ambitious director is reintroducing American audiences to the 70mm Roadshow. Popularized in 50’s and 60’s, the roadshow presented the film with a 70mm film projector, overture, intermission, and a program for the feature.

The Hateful Eight is an unapologetic and important love letter to the film industry, and is possibly one of the greatest experiences I have had in a theater, but it more importantly is a phenomenal piece of moviemaking.

With his past seven films, Tarantino has been known for his bloody, hilarious and comic movies. With his latest project we are given a Tarantino movie that is much darker and ultimately more mature than its predecessors.

Taking place several years after the Civil War, bounty hunter John Ruth (AKA “The Hangman”) captures fugitive Daisy Domergue. Setting out to take her to the town of Red Rock where he will claim his reward, a blizzard strikes their path. The two then seek refuge at Minnie’s Haberdashery, a resting place for weary travelers. Once at the shelter, Ruth and Domergue shack up with six other men who are also hiding from the storm. Suspicious of a plot to free Domergue, Ruth creates an anxious and claustrophobic atmosphere.

From there, The Hateful Eight transforms into a character study like no other. As various events unfold and tensions rise the movie becomes a “whodunit” Clue-like mystery.

The backbone to the film is in its performances but more prominently it’s important theological and political messages.

The “protagonist” of the film, the fictitious African-American Union Major Marquis Warren (portrayed by the Samuel L. Jackson), delivers much of the tension. Due to its post-Civil War setting, racism is a large underlying theme. The Hateful Eight examines the scars of race relations that still existed far after the war. So well written and so raw, the script focuses on true passions shared at the time and how we act in the face of true evil.

Beginning with true hatred and ending with a glimmer of hope, the movie proves to be a profound story of redemption and humanity.

All that being said, this is a Quentin Tarantino film. While it is his most adult movie, it’s script is still often hilarious beginning to end. Even during the movie’s most meaningful statements, Tarantino is able to fashion dialogues that are brilliantly fast paced and witty.

The turnoff that may exist to some moviegoers his how much dialogue there is. The Hateful Eight is almost made up entirely of conversation. One of the film’s largest complaints is its lengthy hour long carriage ride scene. Witnessing an hour of stationary dialogue is understandably not accessible to everyone, but if you are up for the ride the conversations are absorbing.

When the movie does begin to see physical action it can be quite bloody. While much of the gore is dramatized for comedic effect it will undoubtedly bother many. It may not have a kill count like his fourth film Kill Bill, but the violence is far more up close and personal. If you can stomach the viciousness and endure constant dialogue than The Hateful Eight is most certainly an excellent film.

Tarantino’s current perfect streak for making great movies is continued with this, his most ambitious movie yet. Memorable for being a great picture on it’s own and also helping revitalize shooting movies on film, The Hateful Eight will certainly leave you thinking. The longer you think the better it becomes and the more you’ll be longing to see it again.

Quentin’s eighth movie is one of his best and has me anxiously waiting for his next work.