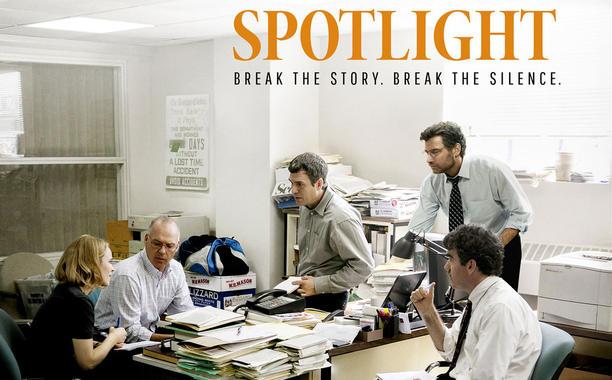 With director Tom McCarthy’s most previous work being The Cobbler, an Adam Sandler movie which was terrible even for his standards, the buzz for Spotlight was uncertain. With this Boston set journalist drama, McCarthy has redeemed himself of any misfires.

Spotlight, above anything else, tells an extremely important story. Shedding light on the now all too famous Catholic Church child pedophilia scandals, the movie narrates the investigations conducted by the Boston Globe newspaper.

The film’s strongest attributes are its all star cast and more notably its realism. Many Hollywood film dramatizations dramatizes far too much. Spotlight is so excellent and so refreshing because it never strays away from its source material.

Often subdued, the performances are portrayed as they had been in real life. If you go into Spotlight looking for chairs being thrown or tables flipped you will be disappointed. Frankly, those are not the ways people truly behave and the director knew it. Instead of scenes of bursts of anger that would be seen in a different films, McCarthy substitutes those moments with real, cut back emotion.

The subject matter of Spotlight is incredibly heavy and it shows as it eats away at characters, but that does not mean McCarthy needed to follow the Hollywood impulse of having characters constantly snap. While there is a scene of excited anger, it is portrayed naturally and is well deserved.

The primary focus of the film is of the Globe’s investigations. Consisting of interviews and shuffling through legal documents, the director does an incredible job at building tension. From molestation victims revealing their stories to the discovery of more predators your stomach will churn with anger.

While the victim’s stories are frequently raw and discomforting, Spotlight never turns to judging religion as a whole. The movie thankfully strays away from having a overly political voice and allows the audience to remain focused on the true opposition. The movie is not a joyful experience and most likely will not leave you feeling happy with the Catholic church, but it effectively avoids choosing sides.

Part of this comes from the characters’ own spiritual indecisiveness. Especially in Mark Ruffalo’s portrayal of journalist Mike Rezendes are we shown a struggle with faith. This makes for quite meaningful side stories that add to the emotional devastation and burden carried by the protagonists.

With any movie of controversial matter, emotion is easily misdirected and becomes manipulating. All directors of these films must walk a very thin line in hopes of not creating any overly daunting scenes, and Tom McCarthy walks that line transcendence and confidence.

Spotlight is written and directed with such finesse, that aside from being of its own historical significance it is still to be remembered and revisited. Collecting six Oscar nominations, the movie will hopefully be taking home Best Picture, for McCarthy has in fact crafted year’s greatest film.

In many ways, Spotlight is just what the film industry needed, a straightforward, honest depiction of a very significant point in history.