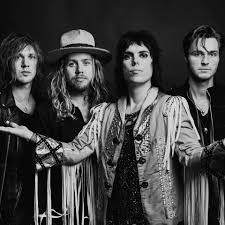 Fair Use Photo
The Struts flaunt their flair with hair, guitars and a classic rock sound.

Play ’em at rowdy ragers, for some lead-footed driving, or when you just wanna lose it when you’re home alone.

They’re the daydream you’ve always had of breaking free from suburban life.

They’re the renaissance of the hairband that you’ve never heard of.

They’re the personification of sex, drugs, and rock n’ roll.

British rock band The Struts have been jamming out and blasting out of stereos in the UK since 2015, but the average American music listener (if they’ve ever even heard of them at all) see these meretricious rockstars as four wannabes that dream of living like Ozzy Osbourne.

What those same average American music listeners don’t know is that The Struts have been living like the world will end tomorrow—and have graciously invited all of us to join them—with the release of two studio albums and four singles.

The Struts’ first studio album Everybody Wants set the stage for what the band wanted to be known for.  Like Queen meets Crue, or Bowie meets Leppard, The Struts came on with grandiose production, a London-like lilt and a jaunty flair that we haven’t seen since Elton John.

The album, headlined by songs “Kiss This,” “Dirty Sexy Money,” “The Ol’ Switcheroo,” and “These Times Are Changing,” is a boisterous bonanza that encapsulates the flair the band always wanted to show.

Tracks “Kiss This,” and “Dirty Sexy Money,” are almost Dead Kennedys-esque.  With a more pointed style, and a tinge of anger, it is constructed as an almost satirical take on the party lifestyle and how the public perceives it.

The other two hits on the album, “The Ol’ Switcheroo,” and “These Times Are Changing,” are Saturnailial anthems.  With big choruses and bigger production, these tracks are the skull splitters that can only be correctly experienced with the volume on max.

Following the domestic success of their first studio album, The Struts followed up with singles, “Put Your Hands Up,” and “One Night Only.”  These singles, while still keeping with the intrepidacious style from their previous works, didn’t have the same lasting power of the aforementioned album.

“Put Your Hands Up,” is like the redheaded-stepchild of Everybody Wants.  While the chorus is simple, and it has the layered sound of the tracks in Everybody Wants, it doesn’t have the “wow” factor.  Nothing about the song stands out, and ultimately blends into all the other works from The Struts.

“One Night Only,” is good.  Just good. Again another track that doesn’t hurt to listen to, but with a more slow, driving style it leaves the listener waiting for a capacious climax of the song that never really comes.

After the borderline blunders of singles, “Put Your Hands Up,” and “One Night Only,” The Struts came back more opulent, and ostentatious than before, with the release of their second studio album, Young and Dangerous.

Consisting of hits like, “Body Talks,” “Primadonna Like Me,” “Tatler Magazine,” and “Freak Like You,” Young and Dangerous brought The Struts back to the British limelight, and allowed them to find their sound, of modern golden-age-hairband rock.

“Body Talks,” is a heart racing, revved up, race anticipating, yellow light on the drag strip.  This song builds up to the rest of the album, yet simultaneously acts as a catchy, balter-inducing single.

Tracks “Primadonna Like Me,” “Tatler Magazine,” and “Freak Like You,” are Young and Dangerous’ anthems.  They’re too brash to play in front of your mother, and too loud for your headphones to take.  They put to music, what The Struts listening experience is like. From being surreptitious to warming up to the style at first, to belting out all your favorite choruses and dancing like the world will end tomorrow by your fifth consecutive pass through.

After Young and Dangerous, The Struts looked to set their sights higher.  Wanting to go from British rockers to global superstars, they hopped across the pond in their very own “British Invasion,” with the release of singles, “Pegasus Seiya,” and “Dancing in the Street.”

“Pegasus Seiya,” is a callback to their former work, inviting the new American audience to get an idea of what The Struts are all about.  “Dancing in the Street,” is everything an American audience wants to hear, put into a song. A quick catchy chorus, simple lyrics, and lacking any meaning whatsoever.  But who needs meaning when you can dance the night away to a great tune?

Why listen to the Struts?

The Struts are the rhyme that brings back all the tunes in a world of chaos: a nostalgia-trip to simpler times, and well… better tunes.

They aren’t heard by many, (not for a lack of trying) but the essence of the band has stayed the same: rock the whole world, and have a good time doing it.

So they’ll keep playing, producing, and jamming out, and will invite everyone along to listen.  Some will, and some won’t.

But hey, not even the sky can bring sunshine to the globe all at once.