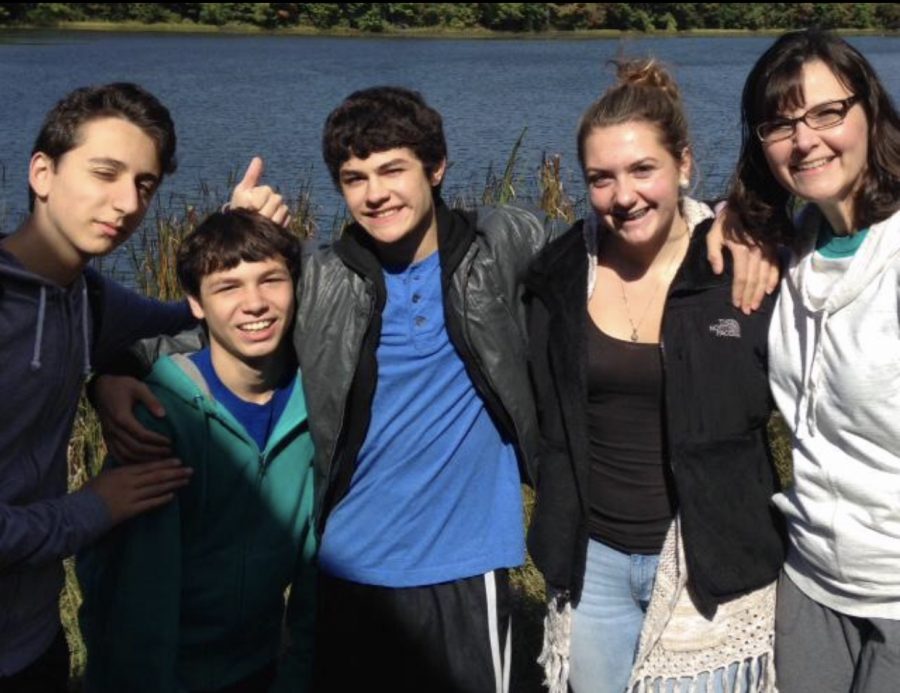 After reading the novel Tuesday’s With Morrie, Giguere and a few of her students attend an ALS Walk in Manchester.

Today’s “Woman to Watch” is English teacher Kelly Giguere who has exhibited influential behavior within her classroom and out in the community.

Between conducting district-wide Socratic seminars to putting out an inspiring quote of the day English teacher Kelly Giguere has been an inspirational teacher in the community, who always encourages her students to go the extra mile and find the golden nugget of every discussion.

Though we all know Giguere as the caring English teacher found in room 627, before coming to LHS, Giguere was going to head down a different career path.

“I wanted to work with kids,” Giguere said. “I always knew that, but I actually went to college as a bio major studying to be a pediatrician and I thought that’s what I wanted to do, but I wasn’t a science person.”

After returning home during a break from college, Giguere was inspired to take an education course at school from her past principal Edmond Thibodeau. After falling in love with teaching, Giguere was then persuaded into branching off into teaching English.

“I just realized that this is really what I like to do and that I just love literature,” Giguere said. “I got fired up and just so excited to talk about books that I changed my major. And thirty-one years later I can’t imagine doing anything else.”

Even though Giguere has been working at LHS for some time, the little things like being told that English has become someone’s new favorite class or just making a student a lover of reading never seem to stop making her happy.

“I’ve worked with students who’ve never read a book cover to cover, and they’ll say to me, ‘That’s the first book that I’ve ever read,’ and those are the moments I remember most,” Giguere said.

Inside her classroom, Giguere creates lesson plans and activities intended to make her students better writers and learners. Even though some of these writing prompts might not be the easiest things to complete, students like senior Kelly Calawa have advanced in writing because of her support and encouragement.

“Giguere has always inspired me to push and to expand my thinking beyond myself,” Calawa said. “She’s really inspired me to work hard and to be dedicated in what I do. I’ve learned that I can’t put in half effort to do her assignments and that I should complete all my work with a certain level of excellence.”

While Giguere has made all of her classes a fun environment to be in, she has never been a pushover when it comes to writing assignments, and for students like senior Molly Lagasse, this way of teaching has lead her to become a more confident and polished writer.

“There have been many times where [Giguere] has graded a paper of mine harshly, and I’m upset because I feel I tried really hard,” Lagasse said, “but she knows I could do better and will never stop pushing me to be better.”

In Giguere’s English classes while her students learn about grammar and diction, they’re also taught that it’s okay to be a vulnerable writer.

“I ask my students to do a lot, and I ask them to put themselves out there with their writing,” Giguere said. “The class steps up to the plate with pieces that students are really hesitant to share and have been written from their hearts, and they’re embraced by that classroom community.”

While not everyone is always so keen on sharing their personal stories in English class, Giguere has built up a secure and safe classroom in which students feel comfortable enough to be open.

“Giguere makes the classroom feel like a warm, cozy, and safe environment so that when I’m in class, all my other worries melt away, and I can just focus on English,” Lagasse said. “She makes me feel like I can talk to her about anything school-related or not.”

Because of her close connections to students and the effort she takes to build and maintain relationships with her students, Giguere has built up a standard that her room is a safe space where no one will be judged.

“I know that as soon as I walk into her class, I can be open and myself, and that creates a totally new way of learning,” Calawa said.

While the aspects of English that Giguere teaches are very important to her, knowing that she’s a confidant to her students is just as important.

“When a student tells me that they feel safe in my room, I think that is the greatest compliment a teacher can receive,” Giguere said.

Giguere leads by example in her class by frequently sharing aspects of her life, showing her students that it’s okay to be vulnerable and honest.

“I think as a teacher it’s important to be willing to open up and let students have a glimpse into who we are as people, which is sometimes that’s scary to do,” Giguere said.

Because Giguere is able to show her students her own vulnerable side, whether during a story or through writing, it has made students feel more connected to her.

“Giguere is the most genuine, empathetic, compassionate and devoted teacher I have ever had,” Calawa said. “The way she opens up to her students the moment they walk into her classroom and intentionally chooses to be real and authentic with them creates this environment that is rooted in trust and safety.”

As Giguere works with her students to perfect their writing techniques, she makes it known that the students themselves don’t have to be perfect all of the time and mistakes are okay to make.

“She’s always been so real and honest with me,” Calawa said. “She’s not afraid to mess up or get something wrong, so she’s taught me to be the same way.”

“I believe strongly that it is an area that we need to make sure we educate students about,” Giguere said. “I think it’s one thing to read about it in books, but yet when you hear someone’s story or a survivor talk about the Rwanda or Bosnian genocide, it makes it feel real to them.”

Making students aware of the past horrors of the Holocaust and other forms of genocide isn’t a new thing for Giguere, and for years she has been going above and beyond to inform kids about these past tragic events. Because of this extensive teaching, Preston was keen to have Giguere present on her team in an effort to get this bill passed.

“She is an outstanding academic school teacher who is not only interested in the topic, but who is also very informed and is doing a wonderful job teaching it,” Preston said.

Though Giguere and Preston have only known each other for a few years, Preston has been able to see all the effects Giguere has on her students.

“She’s exceptional, and I’ve seen the long-term results of her teaching in her students that have gone on to produce outstanding pieces of work filled with passion and knowledge,” Preston said. “I think she awakens the passion that her students have inside of themselves and allows them to pursue it.”

Through the years, Giguere has been able to teach her students more than just English in the classroom.

“Her teaching is a combination of history, social studies, English, language, literature and most importantly humanity,” Preston said. “She’s a wonderful human being who has a big heart. They don’t make them like that anymore.”

To her students, she has been an example of how to be open, honest, and the best versions of themselves.

“No other teacher has pushed me as she has, and I honestly wouldn’t be the student that I am today without her,” Calawa said. “Giguere has taught me to not settle for anything surface level when you could gain so much more knowledge from thinking a little harder and discussing it with others along with being authentic to yourself.”