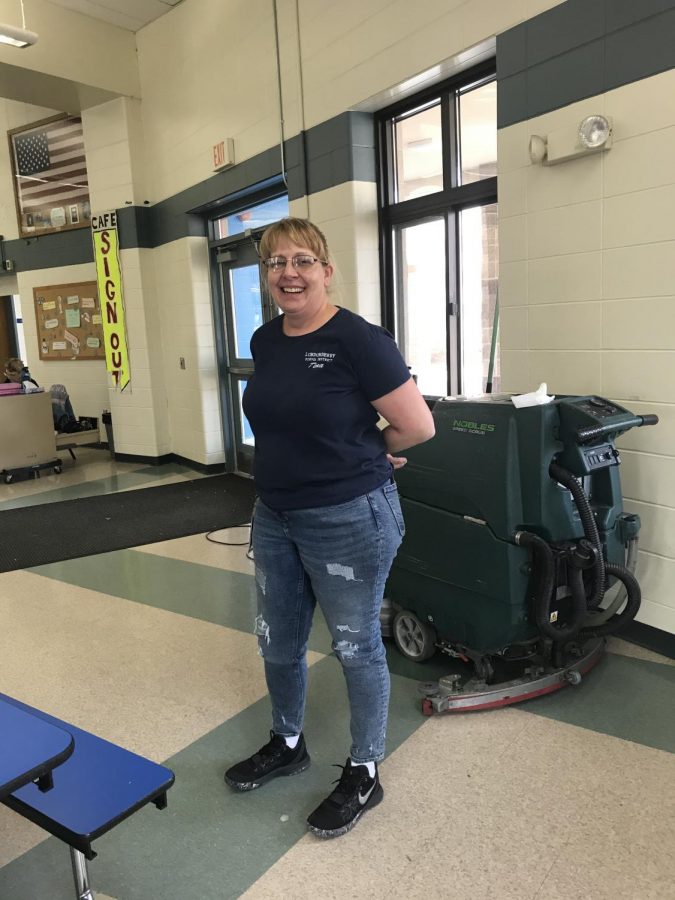 Casey surveys the cafeteria during her lunch duty.

Today’s “Women to Watch” is janitor Tina Casey for shining her light of positivity on the school.

From serving the country in the military to keeping our school clean and inspiring students, janitor Tina Casey has done it all with a smile.

After high school, Casey enlisted in the air force, where she served active for four years and inactive for another four years.

“I would recommend joining the service for young girls, because it brought me out of my shell and made me a strong and independent lady,” Casey said. “It also taught me to accept that not everything is fair.”

From the beginning, Casey had to deal with unfairness and hard situations.

“I had a rough childhood,” Casey said. “I was the girl that was picked on, so I know what that feels like, and I know that I don’t want to take that anymore, so I always just stand up for myself and what I believe is right.”

Instead of accepting defeat, Casey learned to push herself and work hard for what she wants.

“Just wanting something better for myself inspires me,” Casey said. “I just didn’t want to be in the same situation that I was as a child, you know poor and not having a good life or being happy. Most of all, I just wanted to be happy.”

Now, Casey uses the strengths that she’s acquired and the lessons she’s learned to push others to succeed. A couple of years ago, several students wanted to drop out, but Casey convinced them to finish high school.

“I felt like I had to push those students, because I know how hard it is if you don’t have a high school education,” Casey said. “I quit school myself, so I could work full time, but I went back within a year, because even after that short time, I knew that if I didn’t finish my high school education, I wasn’t going to get anywhere. You need your education to get a good job, so I pushed them, and they actually came back and thanked me.”

Over the 20 years that she’s worked here, she’s gathered some important messages to pass on.

“I’ve learned that integrity is so important,” Casey said. “The best advice I can give is to be yourself, be who you are. If you’re spending time trying to be someone else, then you’re missing out on your own life. You just have to be you.”

Because she is the only female janitor, she had to learn how to be herself in a male dominated field.

“I usually get along with the men anyways, because I was raised with all boys, and I have that type of mentality,” Casey said. “However, sometimes, they still think I’m not strong or smart enough, but I prove to them that I am.”

Though they may sometimes underestimate her, her positivity still affects her colleagues.

“She’s happy all the time, which is kind of inspiring to me,” Janitor Charlie Wilton said. “She’s also always willing to help anyone. She also knows her job well and always knows what’s going on in the school.”

Her presence is known throughout the school, with her positivity shining through to students in the halls.

“Every time I see Tina, she has a smile on her face,” senior Molly Norton said. “She just has such an inspiring attitude and a great sense of humor. I don’t know what this place would be without her.”

Casey has experienced what the world can be like, so she knows how crucial a good attitude is.

“A positive attitude is important, because there’s enough in this world to bring you down already, so why not run into a person who is cheerful and nice for no apparent reason and just smile at you,” Casey said. “You don’t know who’s not getting smiled at all the time, so someone needs to stay positive for them.”