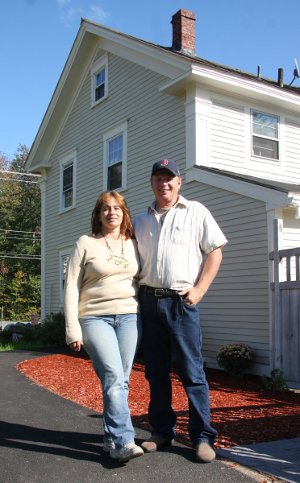 Photo courtesy of the Londonderry Times

Paul and her husband pose in front of their office. This photos taken on the 15 year anniversary of the paper.

Today’s “Woman to Watch” is Deb Paul who has exhibited influential behavior through the town paper and while sitting on the town council.

The fastest way to learn about what’s going on in Londonderry or find out about some events for the week is to pick up an edition of the Londonderry Times, whose founder is Deb Paul. The publication helps townspeople to stay in the loop and read about how active the community truly is.

That being said, the local news wasn’t always so accessible. Before founder Deb Paul created the paper, lots of events and news were slipping through the cracks, and not being advertised to people.

“I got the idea for the paperback in 1999 when I was telling another Mom about how I had just bought my daughter a bike,” Paul said. “She was like ‘Why didn’t you wait for the bike swap this week?’ and I didn’t even know there was one going on. It gave me the idea for a newspaper where stuff like that was being featured.”

Although Paul created the Londonderry Times, her prior experience in the field of communications/journalism was not extensive.

“I graduated with a major in psychology and a minor in biology. I hadn’t ever really dove into running a paper,” Paul said. “But, I got help from people around me and learned a lot fast.”

This help from others made the process of starting the publication much easier for her.

“We dove right into creating everything,” Paul said. “I had my husband do basic design for the pages, and started getting advisers to buy advertisements to pay for things. We started with columns and guest writers, and the ball just started rolling quickly.”

After the hard work of both Pauls, the newspaper started growing quickly. What was originally a magazine-type paper being put out once a month became much more.

The magazine began morphing into more of a traditional paper rather than the informational magazine it once was. Although Paul was proud of her work, she wasn’t surprised by its quick success.

“I just knew in my heart it would all work out,” Paul said. “To be honest with you, I was so confident in it I thought it would get even bigger.”

Now, with the paper in full swing, Paul still sits as publisher. However, her role on staff is different than one may assume.

“I am not an editor,” Paul said. “I am really a publisher. I oversee operations, get us advertisements, find us the best prices for things, pay bills, and suggest content for us to produce. I write occasionally, but that isn’t what my true place in staff is.”

Recently when Paul wasn’t managing the Londonderry Times, she was running for Town Council. She decided to not traditionally campaign the way a candidate would, hoping that would be more genuine.

“I ran as who I was,” Paul said. “I believe in transparency, and I wanted people to know exactly what I was going for.”

Her attempts were successful, as she did end up winning the election. Although happy with her victory, Paul wouldn’t have been crushed if she wasn’t as victorious.

“Of course I wanted to win, but I wasn’t nervous to lose. I love challenges, and wanted to take the risk,” Paul said. “It’s cliche, but I knew that if it was meant to be, it would be.”

Paul’s busy life of conducting the paper and sitting on Town Council, to her, is all made worth it when she thinks of how she will be viewed in years to come.

“I am proud of the legacy I will leave. I want my kids and grandkids to be proud of the work I did for my town,” Paul said. “Every time I fell off my horse I got back on, and I never left a rock unturned.”